Nasty Party - "People On The Street" 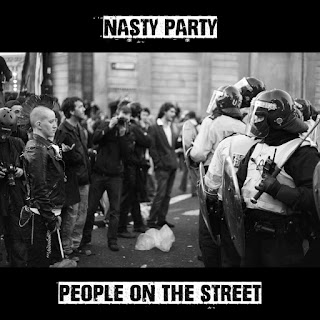 It looks like I have a new favorite EP of 2021! Based in Sydney and London, Nasty Party is a duo consisting of Nasty Simon and Rhys Nasty. Back in December, I reviewed the band's debut EP to considerable acclaim. The follow-up has proven to be even better! All the qualities that I loved about the previous release remain fully in tact: a classic '77-style punk sound, irresistibly catchy tunes, and incredible lyrics that opine on contemporary social and political issues. "People On The Street" leans a little more to the punk side of punk/new wave, and two of the tracks reference issues in Australia that the band cares about deeply. The title track refers to the recent "Watergate" scandal which mismanaged the largest river system in Australia. Musically, it brings to mind '80s Clash with a touch of Wire/Gang of Four. It's funky and jumpy and sure to get you up and dancing. And if you like a song's opening lyrics to make an impression, dig this:
The dirtiest mutts on the planet/
Diggin' up our own backyard/
From Parakeelia to the left wing thugs/
If you think that’s bad grab your popcorn cos/
We got irrigation thieves
Wow! Would you expect anything less from a band that calls itself Nasty Party? Just as passionate is "Locked Out", which addresses Sydney's draconian Lock-Out laws of 2014 that devastated the city's small businesses. On this track, the band rips into some high energy '77 punk-pop rooted in pub rock. Again, the lyrics are sharp as hell and full of righteous indignation. The title of the EP establishes a clear theme for this release: if your elected representatives are failing you, get out there and demand that they do better! Sandwiched in between the two political anthems is "Beautiful", which kind of sounds like the Buzzcocks on speed. All in all, this makes for a brilliant EP and a fully satisfying follow-up to one of last year's most promising debut records. Nasty Party hits a real sweet spot for me, with a sound rooted in the late '70s/early '80s and lyrics focused on right now. I can't wait to hear what this duo does next!
-L.R.
https://nastyparty.bandcamp.com/album/people-on-the-street
https://www.facebook.com/nastypartyaustralia
https://www.youtube.com/channel/UCDdAXF-iNWJ5-_VP7GCCKlA
https://www.instagram.com/nastyparty2019/
Posted by Lord Rutledge at 6:52 AM