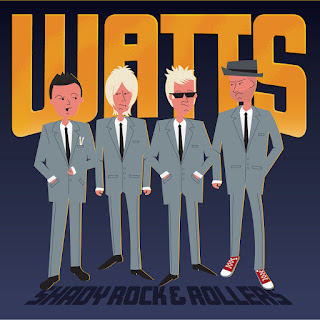 It's hard to believe that it's been five years since Watts released The Black Heart Of Rock-N-Roll -- the greatest '70s rock record of the 21st Century. A string of fantastic singles ("All Done With Rock n Roll", "Queens", "Breaking Glass") followed in the ensuing years -- suggesting that Watts had yet another epic rock album in the works. Today the Boston foursome finally unleashes its long-awaited follow-up to The Black Heart Of Rock-N-Roll. Out on Rum Bar Records, Shady Rock & Rollers is both a vintage Watts record and a logical next step in the band's progression.

While Shady Rock & Rollers finds Watts still carrying on in the grand tradition of Aerosmith, KISS, and AC/DC, it broadens the band's musical vision with a more refined sound and major nods to its glam rock foundations. Building off the '70s hard rock purism of The Black Heart Of Rock-N-Roll, Shady Rock & Rollers brings to mind a time when there was no shame in aspiring to write massive radio hits that would dominate the airwaves and fill arenas. The band still delivers on all the essential fundamentals: big riffs, big hooks, ripping solos, and stellar work from one of one of modern-day rock's finest rhythm sections. If you want fist-pumping rock anthems, the bookend tracks "Loud & Fast" and the aforementioned "All Done With Rock n Roll" are sure to satisfy. "Queens" is like the best KISS song in 40 years. "The Night The Lights Went Down", featuring drummer John Lynch on lead vocals, is a punchy barroom rocker right in that Mott the Hoople/'70s Stones/early Aerosmith wheelhouse. But a particular strength of this album is the way the band complements its loud & fast side by also mastering the art of hard & slow. There are a number of tracks here that find Watts leaning hard into pop territory (yet still rocking hard!). "Shady" seems inhabited by the spirit of Marc Bolan, while "Heavy Metal Kids" and "Shocking Pink" are firmly rooted in the Cheap Trick wing of power pop. "When the Party Ends" is that rare power ballad that's actually powerful.

It is to all of our benefit that Shady Rock & Rollers' concluding track "All Done With Rock n Roll" is not a retirement letter but rather a lamentation on how real rock and roll has fallen out of the mainstream. Watts is most definitely not done with rock and roll and has just delivered another fantastic album redolent of a time when the likes of Cheap Trick, KISS, and the almighty Stones reigned supreme. Uninterested in fame and fortune, Watts makes rock and roll for rock and roll's sake. Having missed the heyday of arena rock (I was only six years old in 1977), I can still experience a similar magic every time I put on a Watts record. It doesn't get much sweeter than popping Shady Rock & Rollers into my car CD player on a sunny day and cranking it loud! Now let's see if we can talk Malibu Lou into simultaneously releasing four solo albums from each member of Watts. Maybe next year?