Beatnik Termites - Sweatin' To The Termites 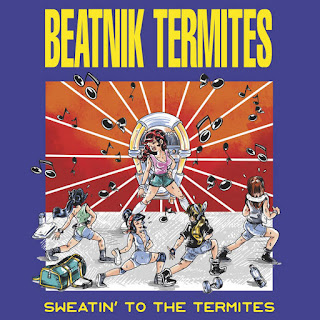 I've mentioned two or three or 20 times that my favorite pop-punk bands tend to be the ones that fully embrace the pop side of the genre. On that note, you would expect the Beatnik Termites to be way up there on my list of all-time favorite pop-punk groups. Indeed, the Termites would be included in my personal holy trinity of pop-punk (most likely joined by The Queers and Parasites). With a legacy dating back to the dawn of the '90s, the Termites paved the way for every subsequent pop-punk band that would take its primary musical influence from the worlds of doo-wop, surf, bubblegum, and '50s rock and roll. If "oldiescore" is a recognized strain of modern-day pop-punk, it's no stretch to say that Pat Termite pioneered it!

And so it's a true joy to hear the old master still at the top of his game in 2021. Out now on Mom's Basement Records, Sweatin' To The Termites is the first Beatnik Termites album in 18 years and just the fourth proper album in the band's history. I was excited by the return of the Termites but wasn't sure how a new release would stack up to the band's classic albums. Well let me tell you: it stacks up just fine! This is a vintage Termites release all the way. The Termites were always the band you could play for your parents if you wanted to turn them onto pop-punk. Well now it's your grandparents that you're converting, and Sweatin' To The Termites is fully up to the task! The formula hasn't changed in over 30 years, any why should it? The band still excels at writing harmony-drenched pop songs about pretty girls and the ups and downs of love. On Sweatin' To The Termites, the group embraces its love for doo-wop and early rock and roll like never before. Throw in nods to the Beach Boys, bubblegum, and (of course) the almighty Ramones, and you've got yourself a recipe for another classic Beatnik Termites album! Songs like "Pet Shop Girl", "Denise Marie", "Out of My League", "Summer Summer", and "My Darling Maryann" instantly rocket into to the top tier of Termites songs. "Tell Me Why" demonstrates that even bubblegum bands can have a serious side. "Rubber City Roller Girl" brings to mind the Ramones on Sha Na Na. "She's Gonna Kill Me" finds the Termites at their punkiest.

It seems fitting that I'm typing a review of a record called Sweatin' To The Termites on a 90-degree day. This really is the ultimate summertime record from the ultimate summertime band. Thinking back to the days when Taste the Sand was a foundational piece of my initiation into the world of pop-punk, I am pleased as punch to discover that the Beatnik Termites have withstood the test of time without having to fundamentally change their approach to music. If you like pop and punk and rock and roll, it doesn't get much better than this.

At 70 years old this grandparent loves the Termites! This album brings back old memories, stirs them up, and spits them back in my face! Feels great!