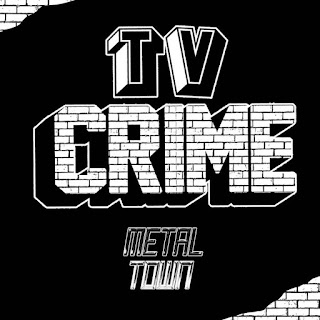 Well here it is, after many years of great anticipation! TV Crime, the Nottingham-based foursome that wowed so many of us the moment its debut track "Hooligans" went on-line three and a half years ago, has finally released a debut album. We've had little in the way of new material from TV Crime over the years - just a pair of singles released in 2016 and 2017. But all the while, the band was taking its time to craft a debut full-length it could be truly proud of. Listening to Metal Town (out now on Alien Snatch Records), one could hardly deny that the band's commitment to getting it right has paid off handsomely. Individuals I hold in the highest esteem have already chimed in with high praise, and I can only echo those sentiments.

Metal Town is nothing short of the brilliant debut that was fully expected from TV Crime - a pub rock extravaganza informed by power pop, first wave UK punk, and '70s glam and arena rock. If you think that sounds like something I'd be especially into, you could not be more correct! Over the course of 13 tracks, the band puts on a clinic on how to play powerful punk rock and roll with all of the hooks and melodic appeal of the best power pop. Kicking off with a new-and-improved version of "Hooligans", this album takes little time in showing us how far TV Crime has come. The group's sound has grown bigger and cleaner - while still retaining the soul and guts befitting a proper pub band. These songs evoke comparisons to everyone from The Jam to Elvis Costello to Thin Lizzy, but not in a way that feels retro or consciously derivative. Essentially, this is great pop music played with the force and vigor of punk rock. From the big hooky rock of "Neo Waltz" to the quintessential sing-along punker "In The Gutter" to the footballer pop anthem "Match Day Programme" to the adrenaline rush of the title track to the pub-hardened Buzzcocks dash of "Never Been In Love", the material is consistently well-crafted and carried off with an energy that thrills. When the band slows the pace a tad (consider its "theme song", "Television Crime"), it comes off like a pop group that ought to be all over the charts. The 7" tracks re-recorded for this release have never sounded better - a testament to both the first-rate production and the tightened chops of a band firing on all cylinders.

I've heard "album of the year contender" mentioned in conjunction with Metal Town by more than one individual. Who am I to argue? I anticipated a great deal from TV Crime on its debut album, but honestly Metal Town manages to exceed what I was expecting. You would have to look far and wide to find a band and album better suited to this blog's readership. And in a wonderful occurrence of history repeating itself, it seems we have returned to the days of Alien Snatch Records being the undisputed king of record labels. I'll drink to that!

Hey man, just wanted to say I appreciate all you do and I visit your blog regularly. KEEP IT UP!

So the other night I remembered Sonic Reducer(a Seattle punk and hardcore show. Well so much more) and they played Hooligans. I pretty much listened to that song the rest of the night. Probably 20 times. Today I checked out the album. Sir you damn correct with everything you say. This album blows my mind. Fuck yeah dude!