The Smart Shoppers - self titled 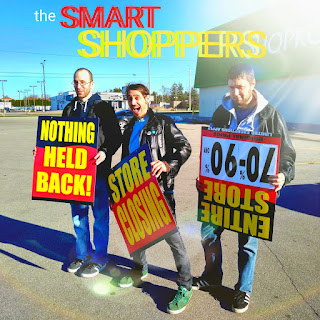 Hey! I've got a debut for you today that I'm totally stoked on! The Smart Shoppers hail from Green Bay, Wisconsin and play exactly the sort of punked-up goofball new wave I've been longing for of late. The Smart Shoppers as they appear on this debut EP include Joe from The Last Sons of Krypton on lead vocals along with Aaron on guitar and Jash on drums. The legendary Rev. Norb recently joined on bass to round out the lineup. The Smart Shoppers, like a lot of bands, started out as just a fun side project. They were never supposed to be a "real" band. But you know how it goes. These guys kept practicing, realized that they actually liked their songs, and went ahead and made a record. And after a couple of years of perfecting their craft in Jash's basement, they finally played their first two shows a couple weekends back...with The Control Freaks! Greg Lowery compared them favorably with The B-52s Wall of Voodoo, and that's definitely on point. They're going for a more aggressive Devo/Minutemen type sound, and that really hits the sweet spot for me. Call it new wavey punk or punky new wave. Either way, it's goofy and fun and catchy and wonderfully weird. I haven't heard a record like this in a long time. It gives me those nostalgic '80s kid tingles but also some nostalgic '90s punk tingles. The band has been prolifically writing new songs since Norb joined, so stay tuned for much more from The Smart Shoppers!