The Middle Ages - self titled 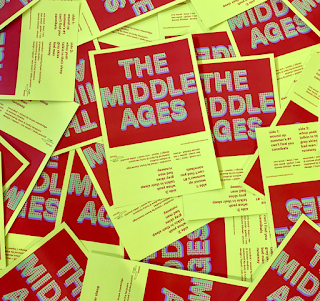 I'm always excited to hear anything that Dan Wood lends his name to, and that immediately makes the debut album from The Middle Ages essential listening in my book. Wood (The Pets, Razz, Tropical Sleep) recently returned to his native Seattle after many years as a fixture of Bay Area garage and punk. Back in the Pacific Northwest, Wood has assembled a new band that's every bit as formidable as his previous outfits. Also on board are Cris Wood on bass/vocals and Donny Hilstad (The Statics, The Dutchess and the Duke) on drums.

Dan and Cris are true collaborators with this band: co-writing the songs and singing them together. Those interwoven vocals and old school punk style will make X comparisons inevitable. And while I'd say those comparisons would not be off base, there's a lot more to The Middle Ages than that. This band has an approach of taking elements from a number of musical styles/eras and forming a sound that's all its own. The Middle Ages draw equally from punk, garage, pop, and rock and roll - crafting punchy tunes with first-rate hooks and a likeability factor that's off the charts. The songs cover all the bases from revved-up rock and roll ("Whoa Yeah") to big crunching power pop ("Runaway") to infectious sing-along punk rock ("Bad Man"). Fans of Dan's recognizable guitar style will not be disappointed. The riffs on this thing are absolutely filthy! Yet the creative partnership between Cris and Dan gives The Middle Ages a very different feel from, say, The Pets. I can't think of another band out there that sounds quite like this. Lean and mean at just nine tracks, this a filler-free and simply terrific debut from a band I expect we'll be hearing about a lot in the upcoming years. The band released the record on its own label Ripe Records, and you can order it here. There were only 300 copies pressed, so get on it!