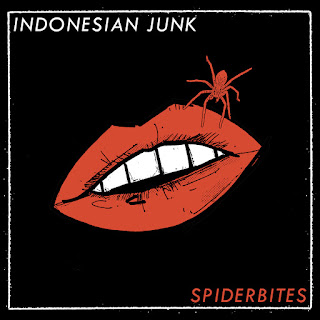 Wait, was I actually right about something for once?! 37 days ago, I predicted that Indonesian Junk's third album would be its best record yet. That was really just an educated guess based off of one song plus the material from last year's Darkness Calling EP. But man oh man, I sure wasn't wrong! Spiderbites, out today on Rum Bar Records, far surpasses all previous IndoJunk efforts. But in a way, that was to be expected given the incremental strides that this Milwaukee trio has taken with each new release. Spiderbites sounds like the record that Daniel James and the gang have been working towards all of these years: a tour de force of Midwest-tough rock and roll formed from equal parts power pop, hard rock, and old school glam punk. If you can't find something here to like, you're looking at the wrong blog!

While the 1970s New York punk comparisons that have followed this band since its inception are in no way off-base, they only touch the surface of what Indonesian Junk is all about. You can pick out influences pretty easily if you want. But at this point Indonesian Junk really just sounds like Indonesian Junk. On this release, the band attains its hardest, hugest sound yet - with the hooks to match! This is not a band that's afraid of trying something different every now and then. The anthemic mid-tempo pop of "City Lights" and pitch-black balladry of "I Could Die" are pretty much without precedent in the IndoJunk catalog. "See The Light" finds the band fully mastering that epic Stooge-y vibe it's been flirting with for years. But what I like best about Spiderbites is that it lets loose the rock in a way that the band's prior albums never quite did. I love hearing Daniel and company lay the pedal to the metal and just kick some ass! "Mean Christine" has everything you need from an opening track: huge riffs, a stick-in-your-head chorus, and some absolutely sick lead guitar! "Wild, Wild Party" and "Headbanger" are like KISS rock anthems if they'd been way more into Johnny Thunders. "Through the Night" is an absolutely blistering rocker that ought to have you pumping your fist and shouting along regardless of what you're doing (be careful in libraries and funeral parlors). "When I Find You" is straight-up one of the best songs released by anybody in 2019. Who doesn't love revenge served up as a cheerful pop song?!

Spiderbites is an absolute blast of an album. Throw it on wherever you may be, and you've got yourself a party! Indonesian Junk give me a little bit of just about everything I desire in music: radio-worthy hooks, powerful guitars and drums, clever and often very dark humor, the spiritual presence of dearly departed punk greats, an energy that excites, ripping solos, and a lead singer with genuine personality. I've been fond of this band from day one, but it's Spiderbites that really blows it over the top for me. This is the best of '70s stadium rock, first wave punk, and American power pop combined into one damn tasty Milwaukee brew. If you haven't been informed yet, take note now: Indonesian Junk is a rock machine! Don't be the last on your block to join the fan club.