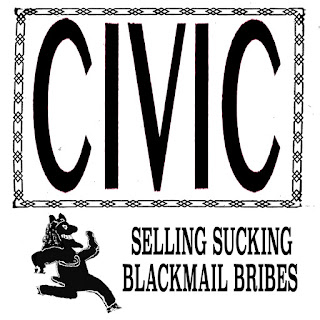 If you have been dissatisfied with how pop-heavy this blog has been in recent weeks, I've got some relief for you today! I first reviewed Civic in April of last year and hailed the Melbourne outfit as one of the best of this amazing new breed of Aussie punk rock and roll acts. The band's new single on Anti Fade and Total Punk Records does nothing to diminish my original evaluation. Believe it or not, "Selling, Sucking, Blackmail, Bribes" somehow rips even faster, harder, and meaner than the songs from the band's debut 12"! The approach is the same - as the band unleashes a furious attack inspired by the Stooges and old Aussie punk. The main difference is how totally scuzzy this track sounds. I just love the rawness and pure sonic barbarism of this number! It lets loose a veritable firestorm of guitars, which singer Jim McCullogh fully matches with vocal rage. This sort of trashy garage punk played with the force of hardcore is hardly anything new. But it's sure been a while since I've heard it carried off this convincingly. This song will just about knock your head off! On the flip, "Velvet Casino" is a little less frenzied but still totally pummeling. It reminds me a little of early Saints, which can only be a good thing.

Now with an American release to its name, Civic is no longer Australia's little secret. If you're not yet hip to this band, get with it!