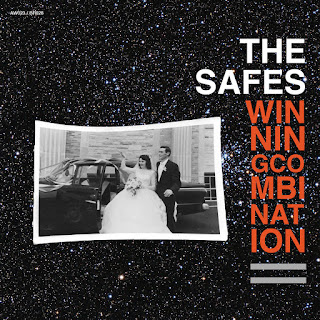 When Frankie O'Malley told me that Winning Combination was going to be a "progression" for The Safes, he sure wasn't kidding! "I like when bands step out and try something different and it's good," he explained. If that was the goal for Winning Combination, I would say The Safes have succeeded...and then some!

Having hinted at a psychedelic era Kinks/Who/Beatles direction in the past, The Safes have gone full-on chamber pop on this, their fifth full-length album. But that's not even the half of it! Always the quintessential family band, The Safes have taken that idea to a whole new level. For this project, the Brothers O'Malley have assembled a veritable orchestra of cousins, nieces, and nephews to add new dimensions to their sound. In total, this album features 19 different brothers and sisters playing together - with violins, clarinets, cellos, vibraphone, and several other instruments building on the usual guitar, drums, and bass. Frankie O'Malley alone plays guitars, drums, bass, piano, Wurlitzer, vibraphones, accordion, sleigh bells, organ, sitar, and melodica on this release! The fact that this album could even be made is remarkable. How many people in this world could find 15 capable session musicians that are all related to them?! Now that's a talented (and very musical) family! Yet as amazing as this concept was, it easily could have flopped if had not been executed so beautifully. It's a credit to The Safes that all of these orchestral touches enhance the songs rather than distract from them.

The O'Malleys have stepped boldly out of their hard-driving pop rock and roll comfort zone, but they remain as devoted as ever to the craft of melody-driven songwriting. The elevated sophistication and added musical layers advance The Safes' sound but do not fundamentally change it. This is still one of America's finest pop bands. And even with everything that's going on throughout this record, the melodies and lyrics are still what shine most brightly. Opening track "It's True" is not just "different" - it's one of the Safes' finest and most striking songs to date. It opens the album in a bright & jaunty fashion, with lyrics that vividly evoke the fresh air that meeting someone special can breathe into our lives ("Circles spinning into light /Exploding joy like dynamite/A century of Saturdays replace a decade of malaise"). That melody will grab a hold of you in a way that seems almost effortless, and it will stay with you. Laden with majestic harmonies and intriguing lyrics, "Open Your Eyes" could just about pass for a Ray Davies composition circa 1967-68. "The Rest of My Life", so delicate and mellow in a musical sense, is so relatable lyrically that it practically stings ("I can't live like this for another day/But I can't seem to live any other way"). Similarly, "Make or Break" is as devastating in its words as it is gorgeous in its melodies. "Dreams That Ignite" is picture perfect chamber pop - featuring exquisite harmonies, lush piano-driven melodies, and nary a loud guitar in earshot.

If Winning Combination had just been a progression for progression's sake, that would have been admirable enough. But if you're going to swing for the fences, you might as well hit the ball out of the park. You don't want people saying, "Well, this is neat, but I'd much rather listen to Tasty Waves or Record Heat." The O'Malleys didn't just set out to try something different - they were determined to uphold the quality of their previous releases. The comparisons to The Kinks' Something Else, The Who Sell Out, and The Zombies' Odessey and Oracle are likely to be frequent with good reason. Those aren't just albums that stand out in those bands' catalogs - they're records you go back to again and again. Winning Combination wonderfully celebrates The O'Malley family and family in general. But I'm not going to put this in the "for fans only" category. This is a new high point for The Safes - and an absolutely a perfect starting place for anyone looking to get into this band. It's available now from the Spanish labels Action Weekend and Bickerton Records!