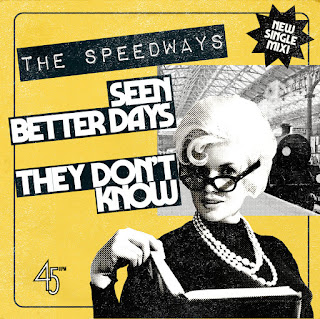 Hey! The Speedways have become a full-fledged band! I previously hailed Just Another Regular Summer as a royal treat for power pop fans and one of my favorite albums of 2018. While The Speedways were originally a one-off project created by Matt Julian, the addition of Mauro Venegas (guitar), Adrian Alfonso (bass), and Los Pepes/More Kicks drummer Kris Hood has made this band a permanent entity. And that's great - because the idea of never hearing more music from The Speedways was really bumming me out! Out now on Snap Records/Hurrah Musica is the debut 7" from The Speedways. On the A-side, "Seen Better Days" is to my mind the finest track from the album. This was the song that turned me into an instant Speedways fan last summer. Backing "Seen Better Days" is the first recording from the full band version of The Speedways - a cover of the Kirsty MacColl classic "They Don't Know". We could get into a whole conversation about why a band should or should not have a go at a seemingly untouchable song. Instead I'll just urge you to read Pulsebeat host Wayne Elliott's interview with Matt Julian over at Just Some Punk Songs. It really gets into the reasons why the band chose to record this song and how it tried to put its own stamp on the number. I must say that while The Speedways had the impossible task of matching the original, their rendition is more than respectable. And if this sends at least one person off in search of the Kirsty MacColl version, it will have been a worthy endeavor!

While The Speedways have already run through their initial copies of "Seen Better Days", more supplies are on the way. Be sure to follow the group's Bandcamp and Facebook pages for updates. And if you still haven't picked up Just Another Regular Summer, you're missing one of the best power pop records of recent memory!

I discovered this band and The breakdowns thanks to this blog.
It was late to see The breakdowns but could see speedways this year in Spain .A great show