Proto Idiot - Find Out For Themselves 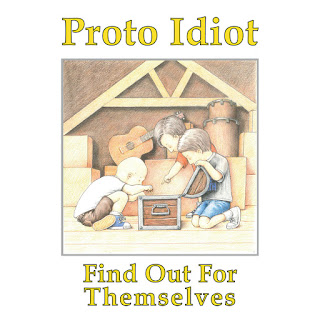 My relationship with post-punk music has notoriously been of the love/hate variety. But in the case of Proto Idiot, it's strictly love. A lot of that has to do with the unique sound this Manchester trio has cultivated. It seems almost wrong to even call it post-punk. It might be better to describe it as "poppy new wave post-punk garage rock art", but I suppose that would be a mouthful. Try fitting that onto a promotional sticker! More importantly, my major complaint with most post-punk is that it's just no fun at all. Thankfully, "fun" is probably the first word that I would associate with Proto Idiot. Find Out For Themselves, the band's third album, matches its "angularity" and musical creativity with tremendous humor and a general sense of adventure and playfulness. Give me a post-punk album that has songs you can dance to, and I'm a happy camper! Check out the one-sheet description: "This is music for sophisticated eccentrics who enjoy the finer things in life – the sort of record that a mad and inbred member of the monarchy would relish." I mean, come on! How could you read that and NOT want to hear the record?!

Find Out For Themselves offers more of those "weird in a good way" musical antics that we have come to associate with the highly creative minds of Andrew Anderson, Callum Darley, and Michael Seal. I really get a kick out of a band that can go from the Wire/Gang of Four with Brit-pop leanings vibe of "Sit Back, Relax, Enjoy" right into the bizarro spazz-fest of "Prokel Yokel". And what comes after that? Sing-along synth-pop? Count me in! I like this album because it manages to traverse just about every corner of Proto Idiot's musical universe. "Fill In" is what Fugazi could have been if they had been English and not a terrible bore. "Nothing To It" is a delightful, Devo-ish romp. "Erase/Rewrite/Repeat" is what might have happened if Paul Weller had never formed The Style Council and instead started a groovy post-punk band. If you were at a club or bar or funeral parlor and heard "Find Out For Ourselves", you would absolutely be compelled to get up and dance. Propelled by Michael Seal's nifty bass work, "You're Not Nice" has a snotty energy to it that is nothing short of joyful. And if you're looking for more of Proto Idiot's "typical" poppy/garagey/quirky goodness, "Someone Else" delivers exactly that.

I've been a fan of Proto Idiot for a while, and I must say that Find Out For Themselves is the most complete fulfillment so far of the band's musical vision. It's fully post-modern yet very much steeped in the classic elements of British pop music. It's wonderfully creative yet still excitingly "punky". Basically these three have made an album so good that it has ruined almost all other post-punk for me. Good going!

great review josh, you can tell that you really like this one