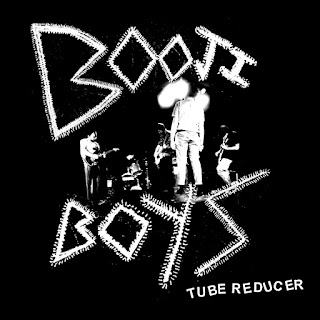 Having taken the garage/punk scene by storm with a pair of brilliant LPs in 2017, Booji Boys have returned with a third album that will disappoint absolutely no one. Tube Reducer is due out on vinyl on Drunken Sailor Records next month, but the digital tracks have been made available for your immediate listening pleasure. Your first response will likely be something along the lines of "This sure sounds like Booji Boys!". And there's nothing wrong with that! This Halifax, Nova Scotia based outfit has an immediately identifiable sound that it has clearly perfected on this outing. In case you've been living under a rock for the past couple of years, I'll summarize: Booji Boys play pop songs at hardcore speed, with scuzzy lo-fi production and vocals so muffled that you'll swear they were recorded in another dimension (I hope I'm not giving away any trade secrets!). But don't let the budget fidelity distract you from appreciating some of the finest songwriting in today's punk world. Compared to its two predecessors, Tube Reducer is every bit as loaded with killer tunes. And the energy level of the band remains off the charts. Tracks like "Lucky Citizen" and "Berlinetta" are thrilling jolts of crackling melodic punk, while "Stevie Cool" is basically anthemic power pop if it were fired out of a missile launcher. While not exactly a cover, the title track is clearly an homage to a certain classic punk song. It's one of THE essential songs to rock out to in the summer of 2019. And while Booji Boys offer plenty of their signature sound here, they never let themselves become predictable. "Herky Jerky" and "Nervous Idea" find them revisiting their hardcore roots, while album closer "Moto-Hard" is precisely the off the rails noise rock anthem I've been awaiting for practically this entire millennium. There's no denying that the band's first two albums were going to be very hard to follow. But in Tube Reducer, Booji Boys have delivered a veritable masterpiece of lo-fi punk rock. It's their best album yet! LP will be out August 16th, so get your orders in now if you want one on silver or orange vinyl!