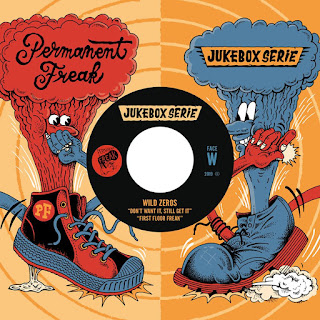 It's hard to beat a split 7" when you really like both bands. Well today I've got a split featuring two bands I like a lot! Out on the new French label Permanent FREAK, this team-up between France's Wild Zeros and Manchester's Proto Idiot appears to be the first installment in a series called Jukebox Serie. Sometimes with splits, bands don't always put their best material out there. But I must say that that is not the case here. Both bands contribute a strong pair of all-new original songs. Wild Zeros turn out the tracks "Don't Want It, Still Get It" and "First Floor Freak". This is already the fourth Wild Zeros 7" release in less than a year, and this effort is very much in keeping with the previous three. Think '90s-style garage punk rock and roll with filthy guitars and a beat that's sure to get you shaking your hips. I'm especially partial to the blazing "First Floor Freak". Given the partnership with Wild Zeros here, it's fitting that "Tell Me What You Want" is Proto Idiot at its "punkiest" (yet still plenty quirky/oddball). If you're looking for a song to inspire you to suddenly start vigorously jumping up and down for no apparent reason other than it would be tremendous fun, this track ought to do it! What a jolt of energy! "New Ways of Seeing" slows the pace a tad, exploring that poppy side of new wave/post-punk/art-punk that these gentlemen are so well known to occupy. And if you're left wanting more, you're in luck since Proto Idiot just released a new LP!

I would imagine that if you're a fan of one of these bands, you're probably a fan of the other. And if not, maybe you will become one now! I hope this is just the first of many installments of Permanent FREAK's Jukebox Serie. It's limited to just 300 copies, so get cracking!

KissAsian is Asian Dramas Platform where you can find all Korean, Chinese, Japanese dramas.