Suspect Parts - "You Know I Can't Say No" (Video Premiere) 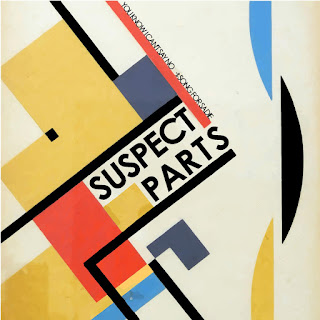 I am deeply honored to premiere "You Know I Can't Say No" - the new music video from Suspect Parts! It has been released in conjunction with the powerpop/punk supergroup's new single of the same name. Following the band's tremendous debut album from 2017, "You Know I Can't Say No" is Suspect Parts' first single in nine years and fifth overall. It's out today on Dirt Cult Records in the USA and Wanda Records in Europe.

Made up of Justin Maurer (Clorox Girls, Maniac), James "Sulli" Sullivan (Ripchord, More Kicks), Chris Brief, and Andru Bourbon (Radio Dead Ones), Suspect Parts represent the union of three countries and several complementary musical aesthetics. The group's brand of buzzsaw powerpop/punk has roots in '60s pop, early UK punk, and the melody-driven punk rock of '70s California/early 2000s Pacific Northwest ."You Know I Can't Say No" is vintage Suspect Parts - a bittersweet pop song with a whole lot of guitar crunch. There are times when I think that Sulli is the new Pete Shelley, and this is one of those occasions! The video was shot at Smail Shock's recording studio in Kaulsdorf, East Berlin. Shock (from legendary Berlin punk band The Shocks) recorded this single as well as the band's LP. You can see him in this video walking down the stairs and watering plants in the control room. I consider myself a big Suspect Parts fan, and this is my favorite track from this band to date. That melody is something else! Accompanying "You Know I Can't Say No" on this release are another brilliant heart-wrenching pop tune in "Song For Sadie" and a really fun cover of "Hundsgemein" by Berlin new wave band Ideal. If you're a regular reader of this blog, you need this record and this band in your life. This is how you do powerpop/punk! My friends in Europe can order the record here! If you're in the States, order here!