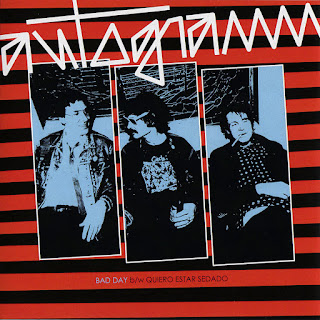 Here we have a release that combines three of my favorite things in music: Canada, new wave, and Jarama 45RPM Recs! Autogramm is a band comprised of well-known players from the Vancouver music scene. Jiffy Marx (Hard Drugs, Blood Meridian) is on guitar. CC Voltage (Dysnea Boys, Loyalties, Black Halos, Spitfires) is on bass. The Silo (Black Mountain, Lightning Dust, Destroyer) is on drums. And yet Autogramm is completely unlike the aforementioned bands. This trio plays a brand of new wave pop that's most definitely informed by early '80s radio (The Cars, Gary Numan, Devo) but also "modern" enough sounding to not be dismissed as a mere nostalgia trip. With Autogramm drawing equally from synth-pop, power pop, and new wave rock influences, it's no surprise that new single "Bad Day" sounds like a radio hit that time forgot. Of course it reminds me of an era in popular music that I very fondly recall. But even without the synths, this would have been a well-crafted and immensely catchy pop song. Those hooks are legit! And at a deeper level, I really respect that Jiffy's lyrics are intensely personal and explore the very serious topic of depression. By confronting such dark subject matter in such a musically uplifting way, this song has the effect of reaching out to those in need. I always love it when music connects people in truly meaningful ways. On the flip, "Quiero Estar Sedad" is a cover of a well-known classic song that just about everyone reading this surely loves. I was just talking with someone recently about the topic of Ramones covers that are genuinely good, as opposed to just being second rate copies. Well this one definitely falls into the category of genuinely good! When it comes to ways to transform a song, altering the musical style and the language of the lyrics are pretty effective options. This is so fun! What a wonderful single - and another smash from the Jarama 45RPM hit factory! I also recommend checking out Autogramm's excellent album from last year titled What R U Waiting 4?!