The Prostitutes - Don't Want A Future 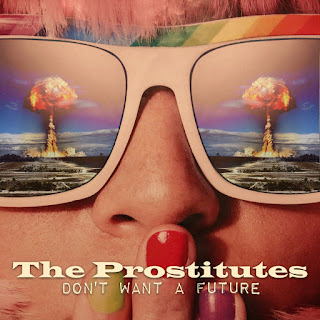 If you had told me 20 years ago that I'd still be reviewing The Prostitutes in the year 2018, I would have thought you were nuts! At the time I didn't foresee The Prostitutes even making it through the '90s - much less another two decades on top of that. And the 26-year-old version of myself could not possibly have imagined that I'd still be writing about punk rock records in my later 40s. Yet here I am still, and here are The Prostitutes still. Don't Want A Future is the band's brand-new digital EP, released via Bandcamp this past Thursday. That might seem like an ironic title for a band that is 21 years past its debut release. Yet to me, it's perfect. After numerous implosions and reincarnations of this musical entity over two decades plus, Kevin McGovern has been the sole constant. As a singer, lyricist, and artist, he is truly one of a kind. He has taken The Prostitutes from Pennsylvania to Ohio to California and now back to Pennsylvania. With the exception of one song dating back to 1998 ("Give Me Head Or Give Me Death"), Don't Want A Future is essentially a recap of the last three years of Kevin's life. He's gone through some serious stuff, and I love that these songs reflect that. If anyone overheard you singing along to these songs, they would probably be worried for your mental health!

McGovern worked on Don't Want A Future with producer Tim Schock from August through November of 2017. While immediately recognizable as a Prostitutes recording, this EP shows considerable progression from the band's existing body of work. It's still very much inspired by classic punk rock, but you can tell that great time and detail were devoted to crafting and refining these songs. Compared to the raw adolescent fury of the band's early recordings, these songs are darker and more melody conscious, but no less raging. And there's just no mistaking that voice!

I have long considered The Prostitutes to be one of the greatest punk bands of my generation, and Don't Want A Future only enhances the group's legacy. It pretty much writes the book on how the punk genre can "mature" without losing its edge. Longtime fans will love these songs, but I don't think you would require a familiarity with previous Prostitutes releases to appreciate this EP. It very much stands on its own. I suppose at this point, nobody should be surprised that Kevin McGovern has turned out another punk rock masterpiece!