The Zambonis/Vista Blue - Songs About Curling 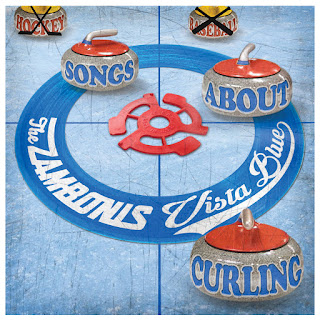 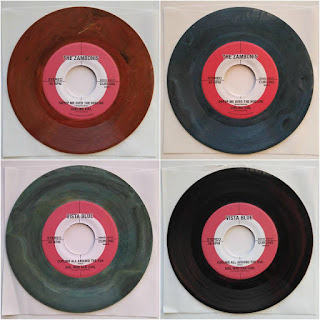 The name of the record tells you everything! Released just in time for the 2018 Winter Olympics, Songs About Curling is to my knowledge the first ever curling-themed music recording. It's about time that this sport had a proper musical tribute. I know I can't be the only one who checks the TV listings for Olympic coverage every day just to find out what time curling is on. If you appreciate skill, strategy, and teamwork in sports, you just can't beat curling. John Shuster is an American treasure! Songs About Curling is a collaboration between the legendary hockey-themed band The Zambonis and baseball-loving F & L favorites Vista Blue. If a record about curling was ever going to get made, these were certainly the two bands to do it! They both excel at articulating the passions and joys of sports fandom, and that remains every bit as true as they turn their attentions specifically to curling. Zambonis' bass player Mike Sembos is actually in a curling league with his wife, and the two co-wrote the lead track "Sweep Me Over the Hogline". I don't think there's anything I enjoy more than a sports song that's actually a love song. Or is it a love song that's actually a sports song? Either way, the metaphors work beautifully on this laid-back country rocker. The Zambonis follow it with "Curling Girl", a psych-pop dazzler about a young lady who truly has it all. The Vista Blue side of the split opens with the sing-along anthem that the sport of curling truly deserves. "Curling All Around The USA" is a Beach Boys inspired bopper that heralds curling as the next big American sensation. That's exactly the kind of positive thinking we need if our nation is to ever rival the mighty Canadians and Swedes on the curling sheet. To wrap up the EP, "Girl Who Can Curl" was written primarily by VB bass player Mark and his wife Beth. It puts a neat twist on girl-crazed pop-punk. Seriously: who could ever blame a young man for desiring the affections of a gal who knows how to handle a stone?

Since no other label was willing to commit to releasing Songs About Curling on a tight deadline for the Olympics, Mike from Vista Blue ended up putting it out on his own label Radiant Radish Records. I love that Mike went to the trouble to get this record made. And I love that The Zambonis were so enthused to be part of this project! This is no joke record. Both bands brought top-notch contributions to this split. It works as a celebration of curling, and it works as terrific pop music. This is a limited vinyl release with a total of 300 copies (in several colors) available. You can order it here. Curling at the 2018 Olympic Games starts next Thursday, so cue up these tunes and get yourself ready!