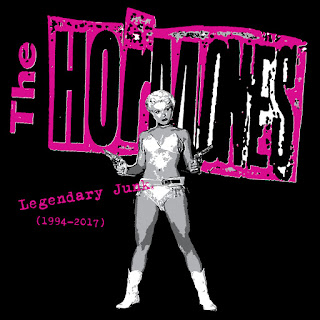 I recently received a nice note from Owen from Dirtyflair Record Company in Australia. He thought I might like a few of his label's releases and sent me a Bandcamp link to check them out. I went ahead and explored the Bandcamp page. Sure enough, I took an immediate liking to this label and the music it has released. The first thing I noticed (quickly!) was that Dirtyflair's catalog includes a compilation album of songs by The Hormones, one of my favorite bands from back in the '90s. I knew of the existence of this collection, but I had no idea it was available in a digital format. I'm thrilled to finally be able to share a couple of these tracks on F & L! When I talk about how 1995 was my 1977, The Hormones are one of the bands I'm referring to. They led a resurgence of Clash/Sex Pistols/Johnny Thunders inspired punk rock in the mid '90s that was hugely influential on my life and writings. Legendary Junk (1994-2017) collects the songs from the band's classic singles along with some comp cuts, unreleased demos from 1997, and a new live version of signature song "Sell Out Young". Altogether, this comprises the first-ever Hormones full-length! It's available from Dirtyflair on LP and CD, which both include a zine penned by Tim Stegall chronicling the history of The Hormones.

In addition to the release of Legendary Junk, The Hormones are poised for their first release of new music since the '90s. The band, which reformed in 2013 after a 15-year hiatus, has set up a Go Fund Me page for anyone with an interest in investing in this project. The new record, called Sing, will be released as a six-song 12". The band will be working again with Dirtyflair on the release of this EP. You can even order Legendary Junk directly from the Go Fund Me page - which will help the band get Sing made!

Some of you will be well acquainted with The Hormones. Others may have never heard the band before. Either way, I highly recommend Legendary Junk to anyone who loves '77 style punk. I'll have lots more to say about Dirtyflair Record Company in the near future, so stay tuned!

Super happy about this! Ordered mine back in September of 2017 and I am eagerly awaiting it.