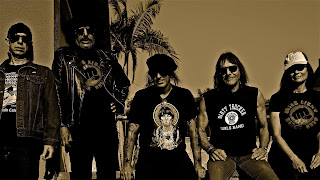 You may recall a post I did on Mike Spent Black Belt back in 2016. After several decades fronting the Spent Idols, Mike Spent teamed up with Richard Duguay (Personality Crisis, the Hellhounds), Diane Nile, and Loren Molinare & Tony Matteucci of the legendary Dogs to form a super-group of punk rock veterans. With two band members over 55 years of age and the other three over 60, all of these individuals have clearly earned black belts in rock n' roll! Produced by Duguay, debut single "I Am A Lion" was quite a departure from the raw '77 punk of the Spent Idols. The band has just completed production on a video for the second track from that single, "Sun Goes Gray". The song was based on a riff that Molinare originally came up with over 30 years ago. It's an homage to the moodier side of '60s garage rock. Check out the video below. The full digital single is still available from the MSBB Bandcamp page!