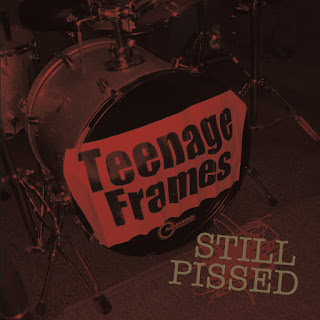 For the first time in five years, we have new music from the Teenage Frames releasing today! In my book, this is one of the preeminent bands in the entire realm of punk inspired power pop. The group's recording history dates back to 1996 and has continued with infrequent but consistently great releases over the past decade or so. In fact, I'd say the band's last three EPs (including this one) are its finest releases to date. And while the band was on a lengthy hiatus for a number of years, the Frankie Delmane/Eric Vegas songwriting partnership always manages to pick right up where it left off. Still Pissed is the name of the EP as well as its lead track, and that sure sounds like a mission statement to me! Anyone living on this planet in 2018 would have plenty of reasons to be pissed. That can either get you down or totally fire you up, and clearly the Teenage Frames have chosen the latter option. "Still Pissed" is unashamedly Ramones-inspired and a true declaration that this is a band that still has something to say and a whole lot to offer. Then comes "She Knows"- a pop song so perfect that I doubt it will be topped by anyone in 2018. It pretty epitomizes everything I love about this band, coupling driving upbeat music and an irresistible sing-along chorus with bummer lyrics that just about anyone can relate to. "So Mean" is a little more on the rockin' side but still boasts a knockout hook. And to finish the record, "Don't Tell Me What To Do" is more great power pop/rock that ought to have you singing along instantly.

Ever since the turn of the century, the Teenage Frames have concentrated entirely on releasing music in small doses. That "all killer, no filler" approach really suits the talents of a band so skilled at turning out brilliant pop songs. Essentially this is one of the great singles bands of my generation. If you went over to Bandcamp and bought the band's three most recent EPs, you could compile them into a single album that rivals just about any power pop LP from the last ten years. Between Still Pissed and the new Number Ones EP, the bar for great pop in 2018 has been set very high!