Boys Order - Do The Wildcat 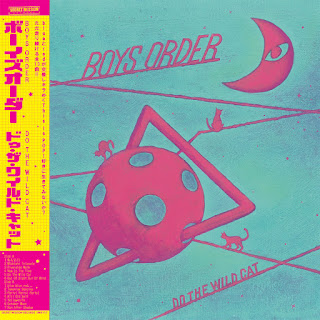 Do you love pop? I mean, do you really love pop? If so, Boys Order is definitely the band for you! This trio from Osaka, Japan has released its long-awaited debut album on Secret Mission Records. It's called Do The Wild Cat, and it's a full half-hour of the catchiest and most unrelentingly fun music you could ever hope to hear. Boys Order have a significant pedigree in the Japanese garage/punk world, with singer/bassist Chihiro Isadora having previously played in Radio Shanghai and Prambath. The band also features members of Thee Bossmen and Teenage Lust. It was back in 2014 that Secret Mission released the band's fantastic debut single, which created quite a build-up for this full-length debut. I have to say that Do The Wild Cat is everything I hoped for and more! Boys Order are very up front about what they're about. They're as pop as pop can be, exhibiting a particular fondness for the punk/powerpop/new wave of the late '70s and early '80s. Think Nikki and the Corvettes, Rezillos, The Stripes, etc., and you're totally in the ballpark. Boys Order take those influences and add their own touch - with a delivery that's jagged and frantic enough to align the band with the best of modern-day Japanese garage punk. Do The Wild Cat will have you bouncing off the walls from the get-go, with energy to burn and hooks in abundance. Songs like "Midnight Triangle", "Party! Party! Party!", and the high-spirited title track fire off like bubblegum-fueled rockets. Even the most cynical and joyless person in the world would be hard-pressed to resist cracking a smile and tapping the old toes upon hearing "Blue Blue Red". I'm not sure what "Kill Old Self" is about, but I have been singing it to myself for days. And when the band pulls back a little on the pace, songs like "Riverside Walk" and "Out of Sight Out of Mind" prove to be wonderful examples of pure pop, new wave style.

There's something about Japanese power pop bands that sets them apart from their counterparts throughout the world. And I'm not just talking about the obvious vocal differences. I cannot quite put my finger on the distinctive characteristics of Japanese power pop. But Boys Order exemplify them well. This is a band with very obvious inspirations, but what it does with them is absolutely unique and wonderful. Buy Do The Wild Cat and prepare to get hopped up on pop!