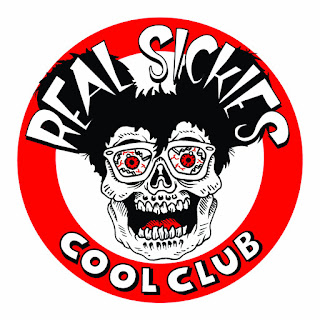 It probably seems like every other day that I'm hailing some great new band from Canada. So how about another one?! Let's do it! I remember hearing some impressive tunes by Real Sickies when the Edmonton outfit first arrived on the scene a couple of years back. Fast forward to today, and the band finally has a debut single out. Released on Teenage Rampage Records, "Cool Club" could not be any more up my alley. The title track is exuberant bubblegum punk a la the Ramones circa Road To Ruin/End of the Century. I probably would have finished this review an hour sooner if I hadn't been bobbing my head to this song the whole damn morning! On the flip, "Everywhere You Go" might be the closest thing to Teenage Head I've heard since...Teenage Head! Those of you who dig this single as much as I do will be happy to hear that a Real Sickies debut LP is in the works at this very moment. In the meantime, be sure to go back and check out the band's underground smash "Go Away" from 2015. If the Cool Club is something I can actually join, then sign me up!