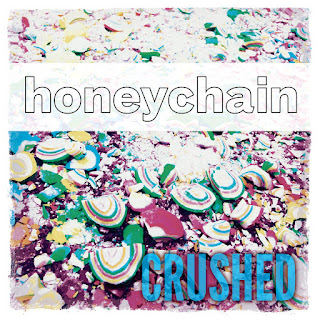 I have been waiting quite a while for the chance to write about a new honeychain record. Honeychain, to me, is the quintessential southern California punky pop band. I was late to discover the group's 2013 EP Futura but have since found it to be one of the present decade's most satisfying power pop releases. Fast forward to today. Crushed is the L.A. trio's highly anticipated debut LP - four years in the making and worth every minute of the wait.

While the quick sell on honeychain is to appeal to fans of The Muffs, Veruca Salt, Go-Go's, etc., the real story is that singer/guitarist Hillary Burton is an immensely talented songwriter. When I heard that honeychain was recording a cover of Material Issue's "Going Through Your Purse" for an upcoming Girlsville/Nerve Centre compilation called Neon Maniacs, I thought that was perfect. Hillary Burton is very much like Jim Ellison - a gifted storyteller with a flair for the bittersweet and a willingness to wear heart on sleeve. She can write a simple hook that will knock you out, but there's even more there if you dig deeper into the songs. Enlisting Kim Shattuck to produce Crushed was clearly a smart move. Seriously, who knows great pop better than Kim Shattuck? And as a producer, Shattuck totally "gets" Burton and really allows her songs to shine. The vibe is punky power pop by way of '90s alternative rock, a recipe that holds up remarkably well in 2017.

Crushed represents so many things I love in music - mixing crunchy guitars, sweet melodies, and soaring harmonies with Burton's emotional vocals and clever, often acidic lyrics. Opener "Bombs Away" is that rare four-minute pop song that doesn't seem a minute too long. It grabs you not just with a strong melody, but also with exceptional lyrics and a vocal that allows you to genuinely feel the disillusionment of love gone bad. The title track is more of the same in an entirely good way. Once that hook comes in, it seems unfathomable that this song is not all over the radio! And while Burton is so incredibly good at articulating heartbreak and regret (a cover of Kathy Valentine's "Some Other Girl" is one of this album's can't-miss moments, and you have to love the deceivingly peppy "Three Horizons"), she's equally adept at taking the optimist's angle. "Ready for the World to End" is unabashedly romantic but in a darkly, twisted way. I wish I had written it! And "Messy Love" is a completely real yet genuinely affirming love song - something very rare in today's rock world.

So after all of this time, I finally have the pleasure of recommending a honeychain album to all of you reading right now. If you like the idea of quality power pop with a touch of punk and the spirit of what alternative rock used to be when it was good, Crushed is a can't-miss release. It's a darn near flawless album that works in plenty of variety (be sure to check out the gorgeous, chiming pop of "When I Stumble" and the heart-racing punk rush of "There Goes That Girl [Again]"). As we step into the month of June, this is the perfect album to crank loud in the car as you soak up the summertime sun and enjoy the heck out of life. And if it seems like nearly every song on the record could be seamlessly added to the Clueless soundtrack, that is a very good thing indeed.

I also think their drummer now drums for the Pandoras on the side.

Indeed, there is a member of honeychain currently drumming for the Pandoras. It's actually Hillary Burton. Truly a multi-talented musician!