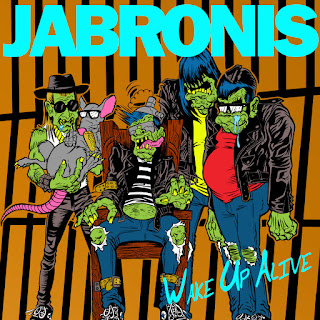 I always enjoying hearing from Jabronis - my favorite active Ramones-core band. Amazingly they've been more prolific of late than their alter egos The Anxieties (has it really been three and a half years since The Anxieties last released something?!). Jabronis' brand-new EP is called Wake Up Alive - currently available as a name your price download over at Bandcamp. With cover art paying homage to the Animal Boy LP, I thought this might be the release where Jabronis leaned towards that particular era of the Ramones. I imagined dated '80s production, lots of synthesizers, and lead man "Tony" succumbing terribly to vocal wear and tear. Probably for the best, none of this was to be found. Wake Up Alive sticks to the fundamental rules of Ramones-core and keeps it simple and stupid. "I.M.B.E.C.I.L.E." is rock-solid first album worship, while "I Love That Girl" evokes the classic Joey Ramone penned love song with its appealing mix of tenderness and humor. The latter could be my favorite Jabronis song yet. "Season's Beatings" is a ripper of an instrumental that will forever change the way I view It's A Wonderful Life. "Wake Up Alive" is certainly a highlight of the EP - a dark but poppy number weaving a tragic tale of young love, psycho killers on the loose, and cruel injustice. All of this for the incredibly low price of free is far too good to pass up. With the cover art looking so sharp, it's good to hear that the band is considering an eventual physical release on CD and/or cassette. But for now, it's digital only. Purchase also available from Spotify, iTunes, and Google Play!

Email ThisBlogThis!Share to TwitterShare to FacebookShare to Pinterest
Labels: Ramonescore