Dirty Truckers from the vaults! 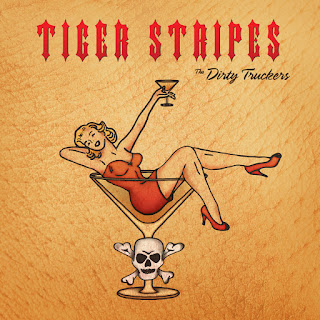 Talk about an unearthed treasure! Tom Baker, singer/guitarist for Dirty Truckers and Tom Baker & The Snakes, recently found a pile of Dirty Truckers singles in his closet from a release the band had done back in 2012. The original 45 contained the songs "Stranger In Disguise" and
"Human Contact". Those two songs along with four additional tracks comprised a larger EP called Tiger Stripes. Rum Bar Records has teamed up with Dirty Truckers to offer a sweet package deal: you get the entire digital EP along with the original two-song 7" for just $5. If you've been enjoying the new Tom Baker & The Snakes album on Rum Bar but are not familiar with Dirty Truckers, it's a pretty safe bet that the latter will be up your alley as well. Think blue collar American rock n' roll with country leanings, forged under the influence of the Replacements, Stones, and Steve Earle. Tiger Stripes is just what you'd expect from an EP produced by a master pop-rock craftsman like Dave Minehan. "Stranger In Disguise" just begs to be cranked loud while you relax on your front porch with a cold can of beer in hand, while "Human Contact" is twangy everyman rock that brings to mind Bash and Pop. The deeper cuts are formidable as well - with "Feedback" rocking along the lines of later Replacements or Soul Asylum and "Just Run Away" demonstrating what quality country rock is all about. While Dirty Truckers and Tom Baker & The Snakes are by no means one and the same, Baker and guitarist John Brookhouse do double duty in both bands. And with drummer Johnny Lynch also pounding the sticks for Watts, Dirty Truckers could legitimately be described as a Rum Bar Records all-star team! Dusted off for new life in 2017, Tiger Stripes ought to be a welcome reissue for fans of Tom Baker or anyone who longs for the heyday of alt-country.