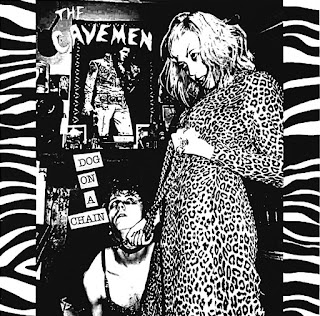 If you've been following the international garage-punk scene closely in recent years, you have likely already experienced the savage sonic assault of The Cavemen. And for damn sure, you liked it! This wild and primal foursome out of New Zealand has to date released two albums and several singles that would have been right at home in the '90s heyday of degenerate trash garage-punk rock n' roll. Slovenly Recordings proudly presents what I believe is the band's first American release - a raging nut-kicker of an EP featuring the wholesome family values anthem "Dog On A Chain". Fans may be familiar with "Death Row" and "Killing Myself To Live" from a cassette release last year that was limited to (of course!) 69 copies. "Dog On A Chain" is exclusive to this release and will melt your face completely off should you fail to wear protective headgear. It's the epitome of what great garage-punk ought to be: raw, scuzzy, and certain to disgust the average person. "Death Row" channels the Stooges by way of the Candy Snatchers and Spider Babies, with frontman Paul Caveman pushing the insanity factor to a level unsurpassed even in this realm of music. Any claims about the lyrics being in extremely poor taste ought to be construed as the highest possible praise. If it has caused you great distress to contemplate that punk music is no longer as dangerous or depraved as it ought to be, this EP will surely be the most uplifting thing you hear this year. Play some goddamn rock n' roll!