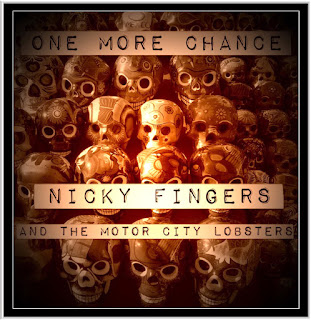 Oh boy! As a huge fan of both The New Trocaderos and Nick Piunti, I was blown away to discover that the two have joined forces to release a brand-new digital single that's now available from The New Trocs' Bandcamp. How did I not know this was happening? It's like Christmas in June! Fresh off of releasing my third-ranked album of 2016, Piunti has teamed up with New Trocs songwriter Michael Chaney and keyboardist extraordinaire Kris "Fingers" Rodgers to form Nicky Fingers & The Motor City Lobsters. Also on board are Andy Reed and Donny Brown from Piunti's stellar backing band. The band's debut song is called "One More Chance", and it does not disappoint. It would not sound out of place on any of Piunti's solo albums, while the songwriting has Chaney's signature all over it. And when you add the contributions of the always amazing Rodgers on piano and organ, you really have something special. Don't let the cover art fool you into thinking this is some kind of death metal type deal. This is pure pop all the way - and what a melody! The recording of this track has been a labor of love going all the way back to 2015. Chaney wrote the song and shared it with Piunti, who proceeded to demo it. And here they are now with a finished product and a new branch added to The New Trocaderos family tree!

From my very first encounter with The New Trocaderos, I've always been impressed by the way Michael Chaney tells a story and his knack for writing about timeless themes. "One More Chance" combines both of those qualities, and Piunti does a beautiful job of his giving his words a voice. As with most songs about longing and lost love, this one is incredibly sad. It's a credit to both Chaney and Piunti that although the song's narrator is clearly at fault for everything that went wrong, I still can't help rooting for him. If this were a movie, I'd be crossing my fingers for a happy ending.

"One More Chance" ought to delight fans of both Nick Piunti and The New Trocaderos. Where else are you going to get this much satisfaction for one measly dollar? So far, this is the only song to be recorded by Nicky Fingers & The Motor City Lobsters. Let's hope that there will be much more to come!