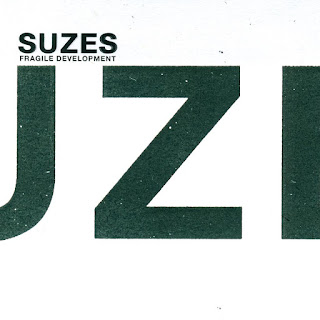 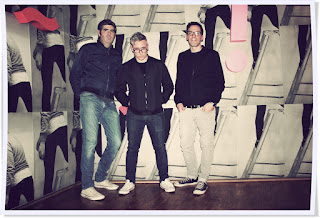 Hot news! Lee Jones, former singer/guitarist for Aussie power pop band The Solicitors, has relocated to Duesseldorf and formed SUZES with new band-mates Roman and Tomo. I was such a huge fan of The Solicitors that I reviewed them an amazing six times between May of 2013 and December of 2014. Jones, a true English gentleman and man of many talents, is also the developer of TAD - an app that enables  musicians to create professional-looking cover art for their online releases.With TAD having surpassed 100,000 installs, the app's latest update has added video functionality in an attempt to plant a flag in the on-line video album cover sphere. Jones is hedging his bets that the on-line video album cover will soon be a big thing in digital music. You can read more of his thoughts on this matter here. Meanwhile, I am happy to report that Jones continues to demonstrate why he's one of my favorite songwriters. SUZES have just released their debut album, which in my opinion is as good or maybe even a little better than The Solicitors' lone LP.

While Fragile Development will no doubt please anyone who loved The Solicitors, SUZES are a new band entirely. SUZES rock a little harder, but without abandoning those new wave and power pop influences that Jones so skillfully absorbs and re-imagines. If The Solicitors mostly existed in an eternal 1980, Fragile Development pushes the calendar forward by years and sometimes decades. "Information Overload" recalls that brief moment in the early '80s when the line between new wave and album oriented rock was frequently blurred. It's a great opening statement for this band, with guitars hitting hard and Jones' lyrical game as sharp as ever. And while Jones throws us power pop purists a couple bones with the splendid "A Stones Throw" and the pilfered Knack riffs of "Blind Trust", a lot of the standout tracks on this album find Jones tweaking his usual formula or throwing it out altogether. "Interested Photographer" is super creepy yet so totally alluring and catchy (which is clearly the point!). "First Love, Last Resort" - a sleek, modern update on the new wave motif - sounds very "now" without sacrificing the stellar pop hooks. "Sometimes Bad Things Happen To Bad People", a punchy nod to the angry young men of new wave, finds Jones taking great delight in turning loose his poison pen.

So, really, what is this debut album from SUZES? New wave? Rock? Power pop? Modern rock? Well, it's all of those things, and to me this is the strongest and most cohesive collection of songs Lee Jones has delivered yet. His lyrics have never been smarter or more beautifully bitter, and he has quickly found great chemistry with his new rhythm section. This is one of those albums where I can go up and down the track listing and find a keeper wherever I land. It seems the "best new band of 2017?" question has been fully settled!