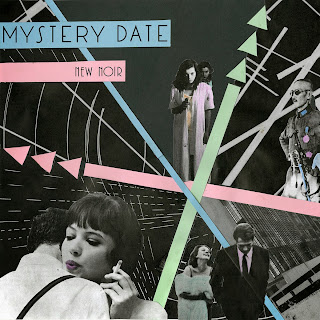 I've been very keen on the St. Paul, Minnesota power pop trio Mystery Date since early last year. And even with my expectations set sky-high, the band's first proper LP has totally blown me away! Not content to just rehash what they already did on their outstanding demo and singles, Mystery Date have attempted an ambitious and thematically coherent debut album. And in every way, they have succeeded in crafting a power pop masterpiece.

I've always thought of Mystery Date as a long-lost British mod revival band from the late '70s that accidentally stepped through a portal to the future and developed a fascination with early 2000s Japanese power pop. So, then, it seems perfectly natural that the group's debut album would be themed around Cold War paranoia, international espionage, and romance under surveillance. With its darker, nuclear era tone, New Noir strikes me as an album that could easily have been made in 1980. Yet it feels all the more poignant given the current state of the world. Musically, it brings together a variety of sources of inspiration. I hear some of Elvis Costello's vocal mannerisms, The Jam's punchy guitars, the Only Ones' tortured romanticism, the Buzzcocks' melodic chord progressions, and First Alert's vibrant modern inflections. Yet overall, Mystery Date have really found their own sound here. Jagged guitars work in perfect unison with a sharp, snappy rhythm section. And Johnny's vocals, full of understated despair, are ideally suited to articulate these tales of forbidden and ill-fated romance. The songs have a way of slowly sneaking up on you - with hooks that require repeated listens before they really sink in. But once they do sink in, it's absolute melodic bliss.

While still operating within the bounds of mod-punk and power pop, Mystery Date have managed to do something genuinely different. I wouldn't call this new wave, but there are major elements of that going on. I wouldn't call this garage, although the minimalist production does fit the bill. I would call this a bold and highly creative work of loud guitar pop. Its vision is cinematic without being pretentious, and its songs will be stuck in your head for weeks. Listening to "Foreign Affairs" or the back-to-back gems "Cosmos" and "Wouldn't You Like To Know", I'm struck by the progression Mystery Date have made in such a short amount of time. Sure, they could have made a debut album that sounded exactly like their singles - and nobody would have complained. But New Noir is a delightful surprise. In its explorations of Cold War romanticism, it has a great deal to say about what it means to live and love in today's society. New Noir kicks off what looks to be another amazing year for albums. Get it from Piñata Records!