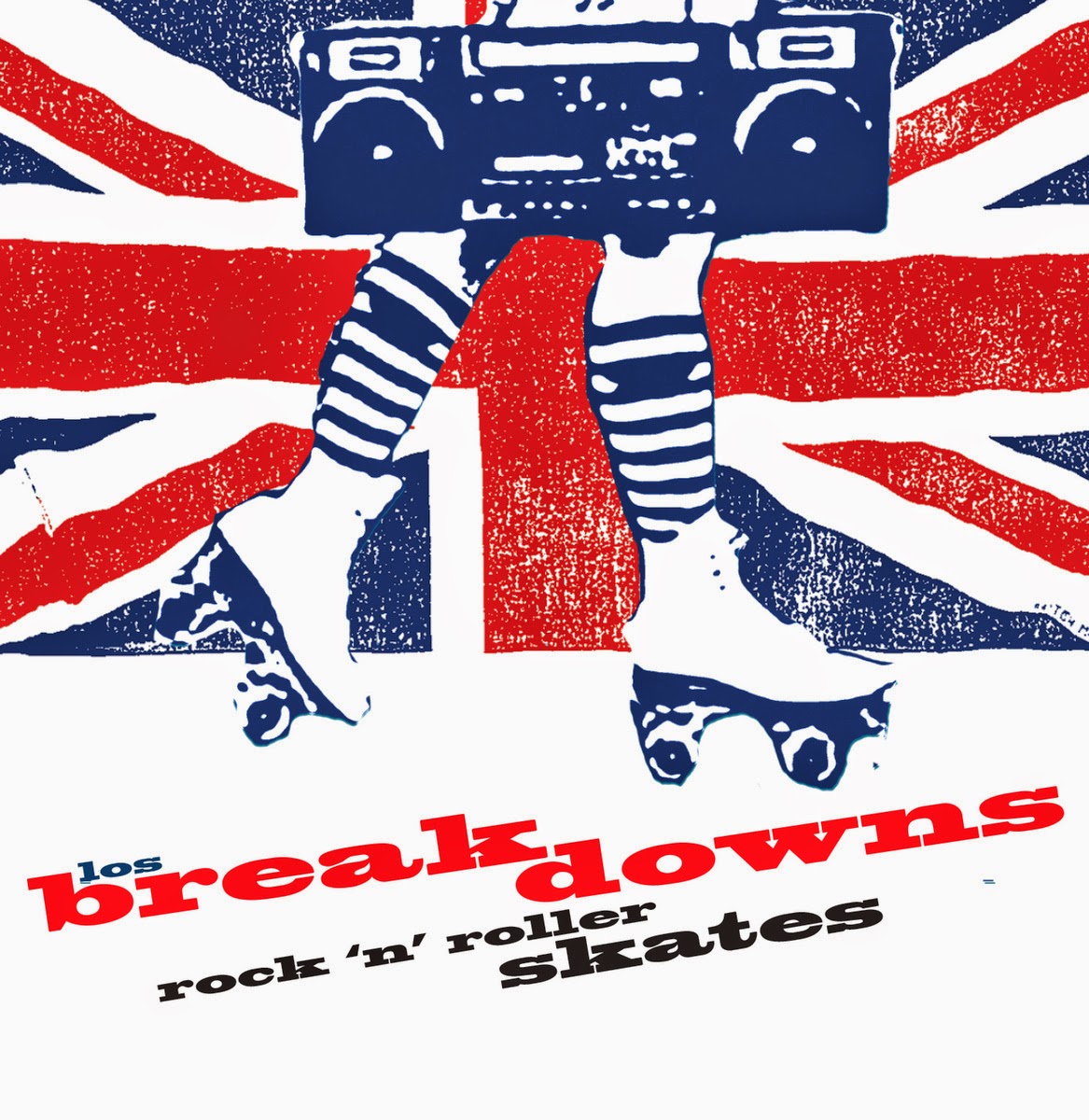 In all my years following music, I can't remember a scene that ever thrilled me more than that wonderful late '90s strain of glam-punk. That was an incredible time to be into glamorous rock n' roll. You had a whole new generation of bands doing power pop and melodic rock by way of the New York Dolls, Johnny Thunders, and Hanoi Rocks. With very little recognition or adulation, bands like the Beat Angels, Trash Brats, D Generation, Teenage Frames, American Heartbreak, and my beloved Dimestore Haloes made some of the most exciting and enduring music of their time. And now, delightfully, the latest album from Los Breakdowns takes me back to those days.

Los Breakdowns - out of Nottingham, U.K. - have been making excellent power pop and rock n' roll for a decade now. Rock 'N' Roller Skates is the band's third LP - and it's poised for an American release on the fabulous Rum Bar Records early next month. I highly recommend all of this band's previous releases, but Rock 'N' Roller Skates takes things to a whole other level. This is the strongest and best-produced collection of Breakdowns songs to ever see the light of day, and again this band is a tremendous combination of just about everything that's good in pop, punk, and rock n' roll. Cheap Trick and the Ramones remain obvious reference points - along with Hanoi Rocks, the New York Dolls, and glam-pop greats like Candy. From the hard riffs and handclaps of "UK Youth" to the high-spirited pub rock of "Dancehall Disaster", this album is absolutely stacked with smash hits. And given that this record was written over a fairly long period of time, the great variety of song styles is not surprising. From the candy-sweet power pop of "Waiting On Perfection" to the doo-wop balladry of "It's Only Love" to the exultant Ramonesy thump of "Stick 'Em Up Buddy", there's something here for everyone. "Rock City Limit" sounds like a long-lost D Generation anthem, while "Mainline Waiting" is classic glam power pop in a Candy/Beat Angels mold. Lead guitarist Matt Julian is a gifted songwriter and one of the shining stars of a vibrant underground rock n' roll scene in England. If he's the Andy McCoy of the band, Joe Maddox is Los Breakdowns' own Michael Monroe - a charismatic singer perfectly suited to the glammy side of rock n' roll and power pop.

While Los Breakdowns remain largely unheralded in the States, an American release for Rock 'N' Roller Skates could change that in a big way. This is definitely an album that ought to have people mentioning Los Breakdowns alongside all the top garage/power pop/rock n' roll bands of the moment. And it certainly won't hurt that they're now label mates of The Connection and Kurt Baker! Rum Bar Records has quickly become one of my favorite labels, and it's great to see the label looking beyond its New England base and signing one of the finest bands the U.K. has to offer. Rock 'N' Roller Skates has been a fixture in my car CD player since I first popped it in there ten days ago. I imagine your experience will be very much similar to mine. These songs are just so catchy and fun, and it's been a little while since I enjoyed a new album this much. This is glam-punk just the way I remembered it - and it's sounding as timeless as ever.