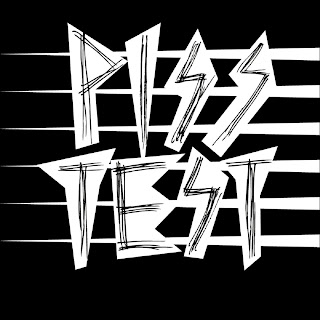 So who's the best punk rock band out there right now? Whenever this question comes up, I can always think of four or five bands that have to be in the conversation. And one of them, without question, is Piss Test. In 2013, this Portland, Oregon trio debuted with one of the greatest punk rock EPs of recent memory. A follow-up album in 2014 was freaking killer as well, and now the band is back with another ripper of an EP. Out on Germany's Taken By Surprise Records, this is the second self-titled EP from Piss Test. And how can Piss Test get away with having multiple self-titled EPs? Because they're Piss Test, and they can do what they want! The band is billing this new release as ST EP2. Taken By Surprise calls it Second 7". I refer to it as the "black and white record". If all of this seems highly confusing, I would just recommend buying everything Piss Test has released to date and then making up your own titles. To me, that's a solution that benefits humanity as a whole.

Whatever you choose to call it, this new record is every bit as raging as I anticipated. Piss Test continues to play awesome snotty punk rock in a Killed By Death/early '80s hardcore vein, and again Zach lives up to his billing as the angriest man in Portland. Except now I'd say he's earned a promotion to angriest man west of the Mississippi. Expect the medal ceremony to be televised. As always, his ability to combine scathing mockery with clever observational humor makes him somewhat of a lyrical genius. No doubt, songs like "Leather Jackets In The Heat" and "Nick Cave Phase" will have people screaming, "Oh my god! He's so right!" Zach is an intelligent and provocative songwriter, and it's always fun to find out what he's going to say next. But it's not just what he says - it's how he says it. The dude's just an incredible punk singer. I love how his vocals teeter between super pissed-off and downright maniacal. And musically, Piss Test has never sounded more fierce. If you were hoping for another sing-along anthem along the lines of "Frigid Punks", "Leather Jackets In The Heat" is exactly that. And "Bad Seed" takes the band to new heights of ferocity.

For the third time now, Piss Test has blown me away with a totally smoking release. And by all accounts, these folks are even better live! Is this one of the best punk rock bands out there right now? No doubt about it!