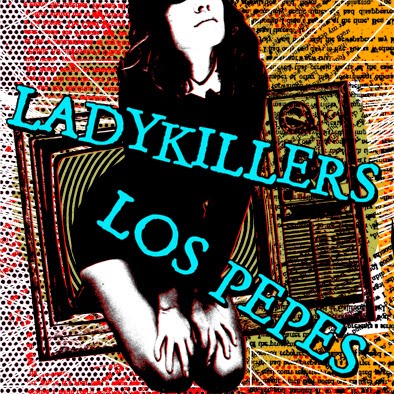 No Front Teeth Records has delivered another great record. In other news, the sky is blue and The Pope is Catholic. This particular release is a split 7" featuring two of the many brilliant English punk bands of the moment: Ladykillers and Los Pepes. Given NFT's impeccable track record, you hardly need me to tell you that this split is hot. But I'll say it anyway: this split is hot! Ladykillers play high energy garage rock n' roll that's catchy as hell and sure to get you shaking. "Repeat" is up there with the best stuff currently coming out of Portland, Ottawa, northern Texas, or any other hotbed of garage punk. Los Pepes are billed as "the loudest powerpop band on earth" and cite the likes of the Testors, Nervous Eaters, and Boys as inspirations. All those influences are indeed palpable in their music. Their tracks "Head On" and "Dressed Down" combine pop sensibilities with a huge dose of ROCK that will knock your head off. They are definitely everything you would expect from a band that's "inspired by the forgotten wax of obscure punk 'no hit wonder' singles from the 1970s and touched by the melody of the girl groups of the 1960s". Sounds like the kind of band I ought to love, right? Exactly!

If you haven't already, check out the Ladykillers' album from last year. It's a great blend of old school garage rock and more contemporary garage punk. Meanwhile, Los Pepes have a new 7" coming out on Wanda Records that will not disappoint! I'll have much more to say about that in a few weeks. For now, I recommend hurrying on over to No Front Teeth Records and snagging yourself a copy of this split while you still can! As always seems to be the case with NFT releases, this bad boy is about to be sold out. Get on it!