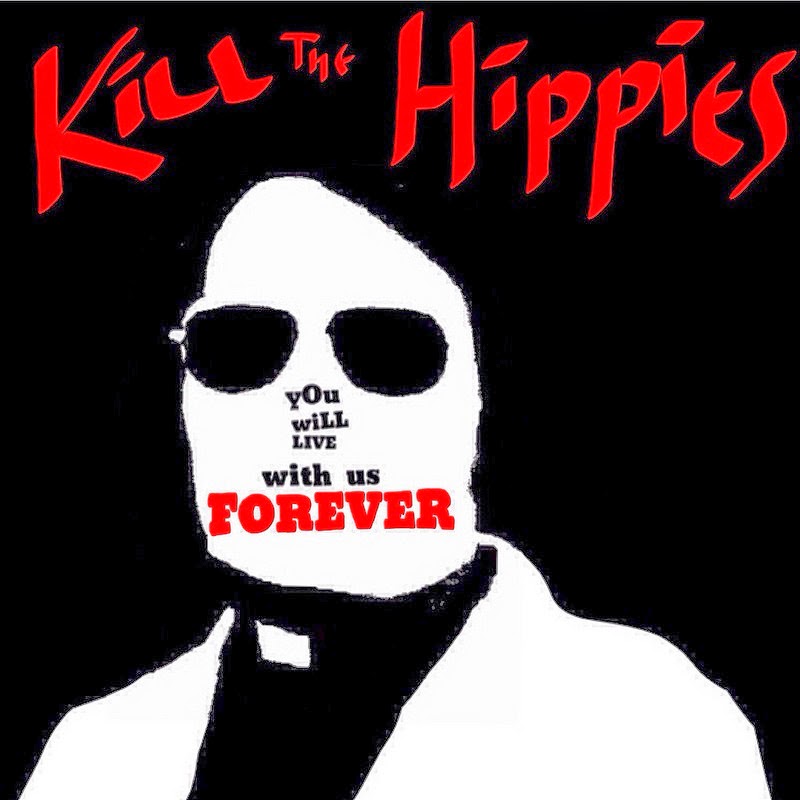 Lakewood, Ohio's Kill The Hippies have been a force in the underground punk world since the early/mid '90s. It's absolutely criminal that this band, for whatever reason, has never really gotten much recognition or acclaim outside of the state of Ohio. Matt Greenfield from Rust Belt Hammer recently wrote that Kill The Hippies "were never really one of the bands that was picked up by trendy labels or written about in the 'cool' kid magazines/blogs". He speaks the truth! And it's a perplexing truth given how much incredible music this band has produced over the years. After witnessing KTH live, Shawn Abnoxious called them "the best punk band to ever breathe air". And not once since has he retracted that statement! While KTH have had numerous releases on tape, 7", and CD since forming in 1993, their brand new LP You Will Live With Us Forever is their very first album on vinyl. So here they are, over two decades into their existence, with perhaps their best release to date. And you can listen to it on a turntable!

You Will Live With Us Forever is the sort of thing you just don't hear enough these days - a non-denominational kick-in-the-ass punk rock record. While it's not quite accurate to say that Kill The Hippies have "outgrown" their spazzy Killed By Death stylings of yore, their sound shows more diversity than ever on this new long player. They tackle everything from ripping early '80s style hardcore punk to classic Cleveland/Akron new wave to pure snotty punk to bizarre, completely uncategorizable type stuff. And all of it works. You could probably play this album for your friends and make them believe it was released on SST Records in 1984! The way Morte and P.P. play off of each other on guitar and bass makes this record so much fun to listen to, and all that genre-jumping is pulled off with tremendous enthusiasm and creativity. I love the way this band has evolved and honed its chops over the years without losing its, uh, "punkness" (yeah, I know that's not really a word!). You Will Live With Us Forever does not attempt to supplant 2001's brilliant Spasms In The New Age. Instead, it's more of a logical next step - continuing the lyrical sarcasm and fierce intelligence that Kill The Hippies are known for while also expanding the breadth of the band's musical repertoire. As is often the case when bands wait many years between albums, the quality of the material is extraordinary. Every time I think I've heard the "best" song, the very next track makes me question my decision. Some of the more straight-ahead punk tracks like "Die In The Past" and "Volcano" are instant hits, but as always KTH seem to especially thrive when they think outside the box. "Fernando" suggests a female-fronted Devo, while "Entrails" is spastic and bizarre in only the best ways. If Gang of Four had been from Ohio and/or completely lost theirs minds, they might have produced a song like "Dance Control".

With vinyl "product" now available, perhaps now is finally the time for the punk world at large to get hip to Kill The Hippies. You Will Live With Us Forever is a truly great LP and an early contender for album of the year. At a time when so many bands categorize themselves as post-punk or garage or hardcore or whatever, Kill The Hippies are all of those things and none of them at once. You can listen to this album and imagine that they could have toured with the Big Boys and Minutemen 30 years ago. Yet Kill The Hippies sound uniquely modern, uniquely Ohio, and uniquely themselves. Thank goodness that that old mentality of "Let's break up before we actually learn how to play!" no longer prevails in punk music. Kill The Hippies, like a lot of bands, are aging like fine wine. And the world is better for it.

liking this, gonna stick a song from it on my blog during the week