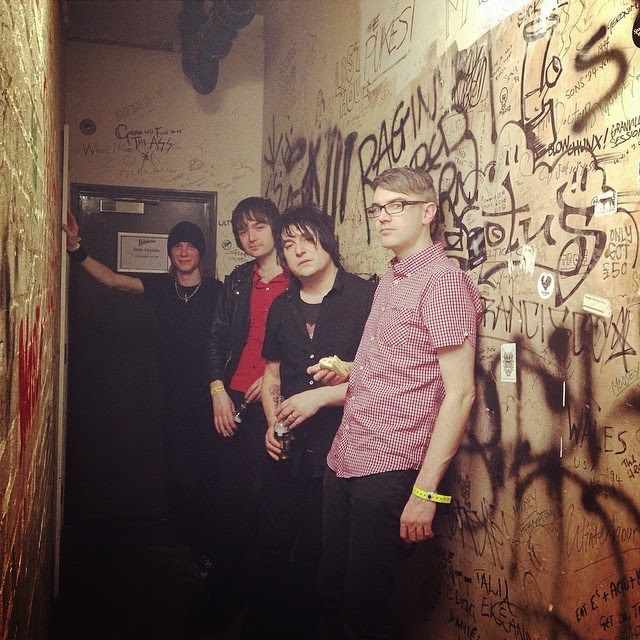 Wow. How am I just finding out about Role Models? My power pop street cred is going to be taking a major hit! This London foursome has a new EP out that is absolutely stunning - which is hardly shocking with guys like Rich Rags (The Loyalties) and Daniel Husayn (Red Dons) in the band. I believe Justin Maurer was in this group at one time - which tells you just about everything you need to know about Role Models. If, like me, you like your rock with plenty of pop, you just might spend the next hour with "Lost In The City" on constant repeat. Cited influences include The Replacements, Elvis Costello, Tom Petty, and Pretenders. So, then, you get the picture. Think power pop meets the good kind of classic rock - with an emphasis on hooks and quality songwriting celebrating the joys of youth and eternal weekends. "Lost In The City" quickly won me over with melodic guitar leads that would bring Bob Derwood Andrews to tears of joy. And then that chorus comes in, and it's absolute perfection! Yes! This is how you do pop! If you just saw a crazy man running down the street singing that chorus, it was probably me. "Suffocate" and "Saturday Night" follow in the vein of power pop by way of punchy barroom rock - with strong echoes of Costello/Graham Parker, mid-period 'Mats, and modern-day greats like The Figgs. These songs are good the whole way through, but I like how they always save a little something special for the chorus! And as a fan of power pop, I'm thrilled to hear some genuine power in the playing. Every power pop band worth its salt has its own Keith Moon on drums, and Pat is definitely up to the task.

If a free download of Lost In The City leaves you wanting more (which it surely will!), I highly recommend visiting the Heavy Hearts Bandcamp page and checking out Role Models' 2013 charity single "This Eventually Leads Nowhere" along with their six-song debut EP from 2011. All proceeds from downloads went to the Haringey (North London) chapter of the National Autistic Society to fund weekend safe play days throughout last summer. Rich wrote "This Eventually Leads Nowhere" with his son Zoli, who has autism. It's a great song, and it went to a great cause.

Now I eagerly await a Role Models full-length. Somebody make it happen!