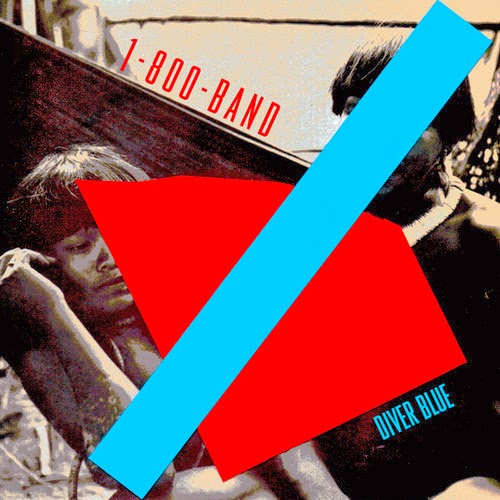 When it comes to contemporary bands that are enamored with the new wave and power pop sounds of the late '70s and early '80s, I tend to judge them on a very instinctive level. If hearing their music gives me those tingles where I feel like I'm a kid again, I know they're doing something right. A case in point is Brooklyn's 1-800-Band (ex Crimson Sweet, by the way). If you told me this band had secured the opening slot on a Cars/Blondie tour in 1980 and somehow stepped through a portal to present times, I wouldn't doubt you. New EP Diver Blue captures the sound and the spirit of turn of the '80s new wave pop and mixes in a touch of '70s arena rock. That's my type of thing all the way - and this band does it well!

Whereas other bands might employ vintage synth stylings with the intention of being ironic or establishing some sort of retro chic vibe, 1-800-Band aren't trying to be hip in the least. Their music is super fun and highly redolent of wide-eyed adolescence - recalling that time in every person's life when falling in love was the best thing in the world - or the absolute worst. But while "Diver Blue" does take me back to a particular time when power pop and new wave were starting to blend together, ultimately it demonstrates how timeless music like this truly is. There's no expiration date on fun times and classic hooks. These songs should appeal to the young and the young-at-heart alike. Frontman Al Huckabee gladly shares the spotlight with brilliant keyboardist Polly Watson - the former giving these songs their emotional center and the latter stoking the infectious energy that makes this band so incredibly appealing.

Clearly, "Diver Blue" is "the hit". It's the most straight-forward power pop song on the EP, and it sounds like something that should have been blaring out of swimming pool radios 34 summers ago. But all four tracks have left me wanting more. The slinking, Cars-y "Make A Comeback" sounds like it belongs on the Valley Girl soundtrack, while the new romantic tinged "Many Happy Returns" could have been a senior prom slow jam in the heyday of John Hughes flicks. If I had to name a favorite track, it would be "Here Comes Summer". The title suggests an upbeat, party type song. But actually this is an aching number full of longing and heartache - with the sort of dramatically lovelorn chorus that has me fondly recalling more innocent times in our popular culture. Back in the day, you would hear a song like this and fully expect it to soon dominate the airwaves. Nowadays, I'm just hoping it will get five seconds of exposure on some shitty MTV reality show. It's truly a perfect pop song.

Diver Blue releases today on Almost Ready Records.You can check out a free stream over at Brooklyn Vegan. Check it out!

Good review..I also hear a bit of "This Years Model" era Elvis Costello, partly due to Polly's Steve Naive-ish (is that a word?) organ parts in Diver Blue..which is one of the best P-pop tunes I have heard in a long time. This group has become a favorite. Looking fwd to Bell House in May with the Tulsa Mafia and ...that group from Chicago.