The Kidnappers are back! 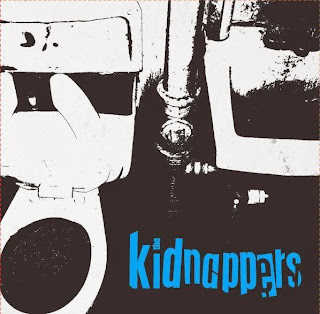 The Kidnappers have been one of my favorite bands for over a decade, so naturally I howled in sheer delight when I heard they had a new single out. You should, too! Considering that this is a band that has released exactly three albums in 11 years, it's always a huge deal when we get any new music from these German greats. In recent years, The Kidnappers seemed to evolve slightly in a more power pop direction. But with this new record, they've taken it full circle and returned to the snotty and aggressive garage-punk sound that built their brand. And holy shit, I LOVE it!

Out on the hot new label Secret Mission Records, "Pills" is the first Kidnappers 7" since "Spanish Girls" was released in 2003. The title track is classic Kidnappers - straight-ahead rockin' punk with a guitar riff that sounds like it's trying to smash your face in. What a ripper! If your favorite Kidnappers album is Ransom Notes & Telephone Calls, this song will be music to your ears (literally). "East Berlin [Ost-Berlin]" is in a similar vein and brings to mind some of the great late '70s Euro punk bands (think The Kids, Pack, etc.). The boys save the best track for last with "Diamonds" - a poppy punk rock n' roll number that's as catchy as hell and sure to get you shaking.

Given how long it's been since we last heard from The Kidnappers, I would have been happy with anything they decided to put out. They could have read the terms of The Reinheitsgebot out loud or done three Leif Garrett covers with flute and ukulele, and I would have been on board. But this is The motherfucking Kidnappers - they weren't going to put out anything less than a stellar record! "Pills" is as good as anything the band has ever done. Clearly, they're not kidding when they say they're better than ever! They've delivered a record that will delight old fans and win over plenty of new ones. Get on it!