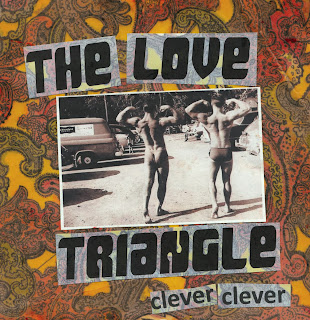 Over the last 18 years of reviewing records, I might have mentioned once or twice that I enjoy '77 U.K. punk. If you know me, and you've heard The Love Triangle's debut album, you probably figured I was going to go bananas for this particular release. Well, you figured right! Moving away from its signature scuzzy garage style, the London trio has turned out a record that sounds like it could have come out in the heyday of English punk. The band's sound retains its raw and aggressive character, but Clever Clever displays a flair for melody reminiscent of early punk groups such as The Boys, Buzzcocks, and Carpettes. Perhaps mainly because of Louis's very "English" vocals, this band sounds less like an imitator of the '77 U.K. sound and more like the genuine article. I hear nothing in this record that would suggest that The Love Triangle has been influenced by the past 35 years of "progress" in popular music. And while lots of bands today are doing the punk/powerpop thing, few mix the punk and power pop together as thoroughly and pleasingly as The Love Triangle. The bass and drums bring to mind the smashing alacrity of the first Damned album, and all in all it's pretty amazing how tuneful these songs sound considering the speed and fury of the playing. The songwriting is aces, and the recording skillfully accentuates the adrenaline rush of the band's attack without burying all of those catchy melodies. Seriously, you could play "Be Old Soon" or "Do You Think That You've Found Love?" for just about anyone and easily convince them that this album was recorded in 1978. Ditto for "Red Button" - the greatest song The Lurkers never wrote! And the fantastic "I'm Still Waiting For A Buzz" reminds us that '60s garage rock and '70s punk were more or less the same thing. Packed full of huge choruses, top-notch melodic guitar work, and smartly crafted hooks, Clever Clever mirrors both the style and the quality of countless classic U.K. punk albums. It's a legitimate album of the year contender. Get it from Sorry State Records in the U.S. and Static Shock Records overseas!

http://staticshockrecords.bandcamp.com/album/clever-clever
Posted by Lord Rutledge at 6:42 AM