Return of The Raydios! 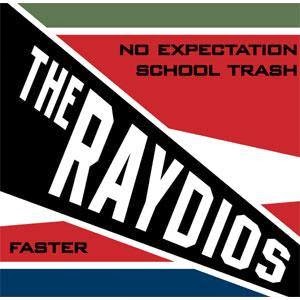 The recent line on The Raydios has been that they fall somewhere in between Teengenerate and Firestarter. That's never been truer than on "No Expectation", their great new EP on Secret Mission Records. This is their fifth 7" since their 2007 re-emergence, and their sixth overall. Fink and co. continue to carry the torch for Japanese punk, and this record is a total ripper! While not nearly as trashy as Teengenerate or as poppy as Firestarter, The Raydios get me with a hooky '70s punk sound that hits my happy zone straight-on. The title track here is a furious shot of Dictators/Ramones hotness, while "School Trash" is more of the same but with a bit of that fractured modern edge we've come to expect from Japan in recent years. I've seen mixed reviews of some of The Raydios' more recent releases, but these two tracks are as good as anything I've heard from this band going back to its original late '90s run. B-side cut "Faster" is actually a little slower, but not in a bad way. It really works the harder/grittier side of classic punk, with requisite nods to the Stooges and enough guitar wallop to power a major city. Even without the overt poppiness of Firestarter, these are some well-crafted and seriously catchy tunes. And while some may long for the gloriously shitty fidelity of those old Teengenerate records, the tougher sound works for me just fine.

Given that the majority of this band's releases are pricey Japanese imports, this is a rare chance to score a Raydios single from an American label. And it's a top tier Raydios release to boot! $5 for this bad boy is a deal and a steal!

I really need to catch up on the 70s style punk rock that's happening now. I think that I burned myself out on it in the 90s/early 2000s and I've definitely been looking elsewhere for musical kicks. I didn't even know that the Teengenerate guys were still doing music.