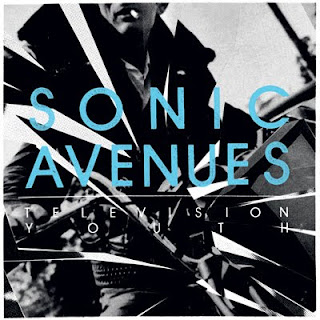 While Les Canadiens may be having their worst season in years, it’s not all frowns in Montreal this year. Sonic Avenues are doing the city proud, and their second LP Television Youth is the first title to make my 2012 Album of the Year short-list (yes, I’m already thinking about such things!). Clearly there are great things happening in Canada right now when it comes to punk rock, and Dirtnap Records knows that better than anyone. Late last year, the label gave us the incredible sophomore album from Ottawa’s Steve Adamyk Band. Now Dirtnap heads east and taps Sonic Avenues for its newest release. Ken has been on fire lately, putting out one killer record after another. And so the winning streak continues! Television Youth is a welcome dose of high-speed punk/powerpop that sounds right in place on the label that gave us the Marked Men and High Tension Wires. Even more so, I’m reminded of The Stiletto Boys, one of my favorite bands of all-time. Rare is the band that can play this fast yet still retain an uber-melodic sensibility throughout. The worst pop/punk bands manage to be neither pop nor punk. Sonic Avenues are the opposite of that! They combine all the best aspects of pop and punk, coming through with track after track of racing, exhilarating tuneage that puts a modernized twist on the Dickies/Buzzcocks formula. “Givin’ Up On You” kicks off the party with a bang, and from there it’s off to the races. Songs like “Throw It Away”, the title track “Television Youth”, and “Static Attraction” are hook-laden burners fueled by hyper-driven melodies and mega-catchy guitar leads. I also enjoy the nimble bass work, superbly harmonized backups, and occasional use of organ in the background. The vocals hit that just-right mix of snotty and emotionally charged, and especially on bittersweet love songs like “Late Summer Goner” and “Back Up Back Down”, I hear plaintive echoes of the Exploding Hearts. What’s not to love?! Sonic Avenues rule the school! The Canadian Invasion is full-on happening!

SO glad Lord Rutledge is back! The cyber world is a better virtual place with you in it, sir.

Thank you, sir! I believe Gunther is the responsible party. He lured me back into this way of life with promises of fresh donuts and premium footwear.

Holy shit! BMO is back too!