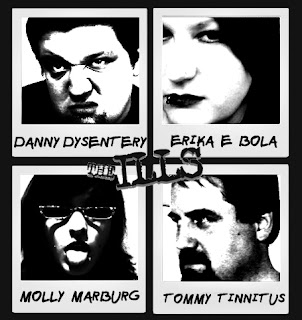 Iowa City, Iowa may be best known as the scene of disastrous tornadoes and floods. It is fitting, then, that the city's greatest band exerts a destructive force of an alarming magnitude. Perhaps, you might say, The Ills got swallowed up by a tornado and were carried away to an alternate universe where the mid-'90s never ended and punk music was at the height of its second golden age. Recalling the glory days of Rip Off Records and the like-minded snotty female-fronted punk antics of say, The Loudmouths and No-Talents, The Ills just might be, literally, the greatest thing since sliced bread. If you treasured your Spastics and Loli and the Chones 45s back in the day, you need to get yourself over to No Front Teeth Records immediately and score yourself a copy of The Ills' debut single! Do not delay! Don't even read the rest of this post! Get this record before it's too late! It's not just in the style of the aforementioned bands- it's of the same quality too! If you're ultra-modern and digital, then check out the tunes The Ills have posted on-line. You will be impressed! Rockin', catchy, and snotty as hell, songs like "I Kill Me" and "1-2-3 Hate You" hit you like a pleasurable punch to the face. And then they're done. In less than 90 seconds, the song is over and it's time to move on to the next one. You're left wanting more, which is the way it's supposed to be with punk rock. When's the last time you bought a single where you kept playing it over and over and over because it really was that awesome?! You'll do that with The Ills, and then you'll go to their Facebook page and beg them to make an LP! If I've said it once, I've said it a thousand times: DO NOT MESS WITH THE MID-WEST!