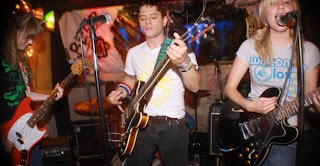 I’ve given up profanity for Lent, so I’ll just say holy fudge triple cream cupcakes! The new Sugar Stems single is so mega-crazy super-duper good! Good gravy, this is the stuff! Kids, do you like the POP? The Sugar Stems have got something special for you! Betsy, Drew, and the gang are set to start work on a new album, but in the meantime a brand new single on Certified PR Records drops next week. A-side cut “Greatest Pretender” is another bright, upbeat sugar-bomb from a band that specializes in exactly that. Very Shivvers-esque! I just played it seven times in a row, and I am still craving a repeat. The reason to release singles is because you can write songs this good! Perfection. On the flip, “Did You Ever” is a bouncy, feel-good number that rocks just a little too hard to be called “twee”. Love it! The band that made Milwaukee famous is at it again. You can still download their incredibly awesome LP at their bandcamp site, and by all means check out certifiedprrecords.com for the skinny on how to score yourself ten copies or more of “Greatest Pretender”!

http://www.facebook.com/sugarstems
Posted by Lord Rutledge at 7:42 AM

Awesome! I'll have to grab a copy of that!