Human Toilet is not a lifestyle choice! 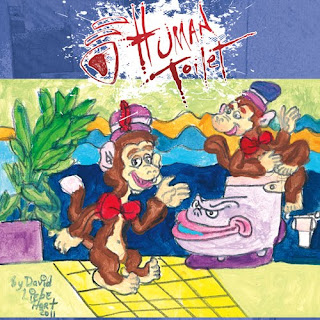 Take a shredder style metal guitarist with a secret love for Black Flag and add in a singer who sounds a little like Lee Ving. What do you get? Human Toilet! This Brooklyn trio transforms that early ‘90s metallic post-hardcore sound into something genuinely cool. Plain and simple, these guys rock! And what I really appreciate is how great their new album sounds. It was recorded with analog technology, and you can totally tell! Even listening on a digital format, it sounds like you’re playing a vinyl record. It’s got a warm, heavy sound befitting the band’s crushing power. The drums pound; the guitars roar. This trio is tight! No doubt Human Toilet borrows some of the noisy and atonal aspects of late ‘80s/early ‘90s indie rock. But at heart they’re still a punk band, playing hard and fast and oozing attitude at every turn (with requisite tongue-in-cheek lyrics). On tracks like “Human Toilet”, “Low Life”, and “Giuliani Time”, they fire up the steamroller and flatten everything in sight. Elsewhere, the grinding guitars and aural intensity of “Must Love Dogs” and “The Long Con” have me feeling like it’s 1992 again. Jayson from To Eleven hilariously and astutely describes their vibe as “What if the Rollins Band had not sucked?” That’s perfect! This is what early ‘90s mosh pit rock should have sounded like: bruising and punky and scummy in all the right ways. Think later Black Flag. Think Fear meets Jesus Lizard. Kurt Cobain would have been a fan.