How About The About: Blanks? 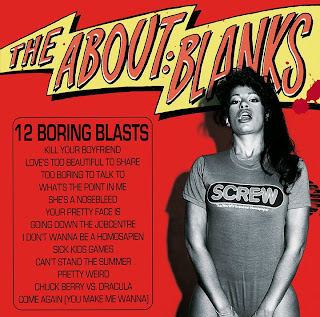 Implored by F & L’s head talent scout Greg Mongroll to check out Berlin’s The About: Blanks, I diligently obeyed. I bought $200 headphones, retreated into the cave, and let the noise flow through me. Good things started happening immediately. There was dancing and fireworks and a faint scent of sausage. Greg, you know what I like! The Germans gave us lager beer and bratwurst, two of my favorite things in the world. They’ve also given us some of the best punk rock of recent years, and The About: Blanks are essential players in this newest wave of Deutsch-core. You may remember some of these guys from bands like the Shakin’ Nasties, Moorat Fingers, The Not Amused, The Shocks, Frantic Romantics, The Bottrops, and King Kahn and the Shrines. They’re all card-carrying members of the Justice League of European Punk. Now they are one united force. They’ve got a new LP out called 12 Boring Blasts, and they’re poised for a title shot at the pogo-punk championship belt. Like fellow Germans the Modern Pets, The About: Blanks do the snotty ‘77 thing with hints of pop and a jumpy modernist spark. Their myspace page is loaded with songs you can stream or download- including a couple tracks from the new album and the band’s entire debut EP from 2010. “She’s A Nosebleed” is still the hit - it’s the kind of insanely catchy pogo-licious sing-along that I have not been able to resist in my adult life. Aces! If The Briefs had Johnny Rotten on vocals, and he was German, it would sound like “Your Pretty Face Is Going Down To the Jobcentre”. There’s more Sex Pistols worship apparent in “Too Boring To Talk To”, while the great “Kill Your Boyfriend” comes on with Clashy riffs and Ramonesy lyrics. And what kind of genius comes up with song titles like “Chuck Berry Vs. Dracula” and “Come Again (You Make Me Wanna)“? Brilliant! This might be my favorite new band for 2012. Seriously: how did I not already know about The About: Blanks?! I’m sure Greg wondered the same thing. That’s why I pay him the big bucks.

Can't get enough of this band! Nice entry, Josh! I got some more up my sleeve. Stay tuned!