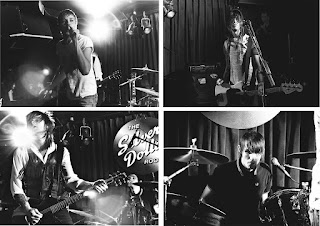 What’s this, another Canadian band?! Damn straight! And I’m just gettin’ started! The Canadian Takeover cannot be stopped at this point. There is too much momentum, too many reinforcements in tow. By the end of this calendar year, your children will be playing hockey. We’ll all be drinking Moosehead and eating poutine. Tim Hortons will buy out Starbucks. And that is okay by me! In my three-and-a-half year absence from music reviewing, I missed an awful lot of great singles by Toronto’s Marvelous Darlings. Single Life compiles them all onto one super-awesome 21-track collection. The sales pitch on the Marvelous Darlings is that they do “some of the best ‘77 punk meets power pop since the Exploding Hearts”. High praise indeed, but I agree totally! And where the Marvelous Darlings really differentiate themselves from a lot of the other nouveau punk/powerpoppers out there is that they inject a heavy dose of rock n’ roll into the Undertones/Buzzcocks blueprint. I hear a lot of Cheap Trick in this band, and even some early Replacements in songs like “The Swords, The Streets” and “Careerist”. These dudes can flat-out rip it! The guitar playing is especially hot. Ultimately, though, it’s the songs that are the real treat here. And these guys know how to craft infectious melodies and catchy choruses that’ll stick in your head from now until the end of time. “I Don’t Want To Go To The Party” is high speed pop/punk that’s teeming with energy and jammed with hooks that could snag a shark. “I’ll Stand By Her” might be even better. But when they slow things down a little and full-on embrace their pop side, they truly demonstrate what they’re made of. “Teenage Targets” is sooooooo good. It’s what every love song should be - passionate, touching, tells a great story. I love the melody, I love the harmonies. It sounds like it should have been a radio hit 30 years ago! I am powerless to resist it. And “Lagoons” is in the same class. It comes on all tender and pretty, then intensifies into a rousing anthem of love and longing. I’m obsessed! Single Life compiles 16 tracks plus five demos, and it’s all gold. You doubting me? Stream it and listen for yourself. See what I’m talking about. Prepare yourself for Canadian dominance. There will be more invaders.