Sometimes it's good to be a Bad Sport! 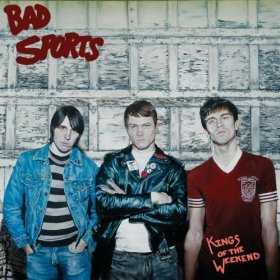 Some things never change. Back around the time I bowed out of this music-reviewing game, Dirtnap was far and away the best label going. Four years later, I jump back into the fray. And what do you know? Dirtnap is still the big dog of punk labels! How do you like them apples?! Ken may very well have put out the two best albums of 2011 so far. You know how I feel about Something Fierce’s Don’t Be So Cruel. And now we have the sophomore effort from Bad Sports right on its heels! Yep: Ken Dirtnap knows good music.

If there were a family tree of Dirtnap bands, Bad Sports would be on the “ branch” with Something Fierce, Marked Men, and High Tension Wires. The first thing I thought when I heard new album Kings of the Weekend was that it sounded like something that would have come out on Rip Off Records in the early 2000s. And that’s meant as high praise, brother! Bad Sports have that garage punk meets catchy ’77 punk type thing going on that the Marked Men popularized back in the day. And Mark Ryan himself sat in the producer’s chair for this album. But Bad Sports are not Marked Men wannabes. They’re their own band entirely, and they’re doing proud. This is the kind of music you just don’t hear enough of these days: straight-up kick-ass punk with balls, melody, and energy out the wazoo. There’s an obvious Ramones influence in play, but not in a wimpy pop-punk sort of way. These boys rock! Ryan’s production is clean and crisp. But rather than sanitizing the Bad Sports’ sound, it actually makes it more powerful. And with songs this well-written and exuberantly played, who wouldn’t want sonic clarity?! The album title makes you think of good times and simple fun, and that’s exactly what the Bad Sports bring. Rarely do you hear a band that can deliver both a fast-and-furious adrenaline rush of punk rock and perfectly-crafted hook-laden pop songs. But Bad Sports do exactly that. Kings of the Weekend is a total blast. It’s the kind of album that you can throw on anytime, and immediately it makes your day better. Every song is good, and only two of 14 tracks clear the two-and-a-half-minute mark. As the Road Warriors used to say - what a rush! We can throw around buzz words like “garage” and “power pop” if we want, but ultimately this is just good old-fashioned punk rock. And Kings of the Weekend is quite simply a freaking great album. So is it my #1 album of the year, or only my #2? I’m not telling!

Fantastic LP. On heavy rotation here. Def in my top 20 of this year! Highly recommended...

Wonder if they've played with The Ugly Beats...

Good call, G! Denton is about a four-hour drive from Austin, so I'd say the odds are goods that Bad Sports have done a gig or two with The Ugly Beats. They've always got one hell of a scene in Texas. How about that Oklahoma State/A & M game!

Four hours is around the block in Texas! College football is getting stupid right now, what with the switching conferences and all. Let's blow it all to hell and have ODU join the Pac-12. Or 13. Or 14...

I'm such a traditionalist when it comes to college football that I don't even acknowledge the validity of the Big 12. Bring back the old Southwestern Conference!