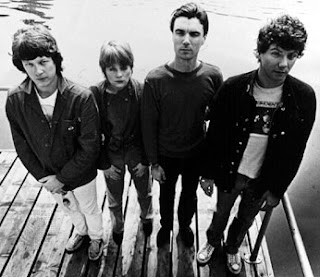 Given that I am and have always been a ‘70s punk/new wave guy, I know I’m supposed to like Talking Heads. And so I’ve tried. I really have. I’ve made every effort. I’ve been open-minded. I’ve given Talking Heads a good three decades to win me over. But when it comes right down to it, I kind of hate their music. Yeah, I know. “Psycho Killer” is cool. And “This Must Be the Place” is pretty great. But that’s pretty much it. David Byrne bothers me. I thought he sucked when I was 12, and I think he sucks now. And I generally don’t mind “punk” bands with an art school influence. But for whatever reason, I can’t stand Talking Heads. The closest I come to loving a Talking Heads song is “Genius of Love” by Tom Tom Club. And having been bombarded with 30 years of critical and fan acclaim for Talking Heads, I can only gather that there’s something wrong with me, something I’ve yet to “get”. It’s not them, it’s me. Two questions, then, faithful readers. First, does anyone else out there think Talking Heads suck balls? And second, do any of you dislike certain universally acclaimed bands? Is there a band that everyone else likes that you, for whatever reason, have never been able to get into? Inquiring minds want to know!
- L.R.
Posted by Lord Rutledge at 8:57 AM

Josh, has someone tried to shove this band down your throat to the point that you had to turn away from them? That happened to me when i said to a bunch of ears that i didnt really care for Black Sabbath that much... partly cause my brother wore me out on the stuff as a kid. So what happened? These people wanted to play nothing but black sabbath all night to try and convert me or something...

They cteated Black Sabbath to be a sort of authorative line that, naturally, i had ro defy. Only in recent times have i began to really listen to Black Sabbath, and in turn become a fan. "War Pigs" is my favorite track...

Actually, I never had anyone shove the Heads down my throat...But I totally get what you mean! I would imagine that would make it worse if people were actively trying to "convert" you. In the end, we have to take to a band on our own terms like you with Sabbath. I remember publicly proclaiming that I just didn't "get" the Dillinger Four, and having people tape their albums for me and whatnot so I could be properly educated. And, you know, I STILL don't get the Dillinger Four. With the Heads, they always seemed to be a band I was supposed to like if I dug all the NYC punk stuff. But to be honest, I kinda wish the Ramones and Dead Boys would have set fire to the Heads' van and sent them running for the hills, never to return.

Devo and Pere Ubu are a better kind of "weird" than Talking Heads. That said, I think they are a decent band. Much like Peter Gabriel, I'd never go anywhere near Byrne's solo stuff. To me, world beat is the music of Volvo-driving white guys.

The band I'm choosing is Radiohead. I once owned Pablo Honey and The Bends, but I gave them to a friend who'd been looking for the discs. That was at least seven years ago, and I haven't felt the need to replace the albums. After hearing something like Compulsion's Comforter, any Radiohead slab would be lacking compared to it.

I'm with ya. Even "good" Radiohead is kinda like, eh, so what? And bad Radiohead is the opposite of everything I like in music. Like you, I made every effort. "Creep" is the balls, but any serious 'Head fan will likely tell you that they didn't really "become" Radiohead until OK Computer. Don't even get me started on Kid A. Guess I'm not entitled to a refund since I physically destroyed it.

That alone makes me want to give the Dillinger Four another chance!

There's a fine line between Quirky and Stupid. I've always thought they sucked.