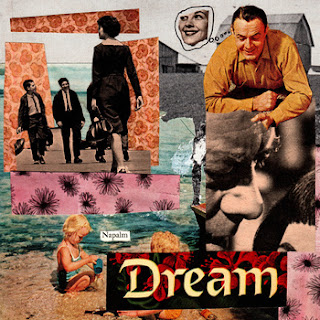 Blending the sounds and styles of Husker Du, Dinosaur Jr., and early Replacements into that noisy basement pop-punk thing that’s been big in the Midwest for years, Appleton, Wisconsin’s Tenement has firmly established itself as one of the top bands going these days. Long-awaited debut LP Napalm Dream, released this summer, has got to be in the album of the year conversation. It’s really freaking great. Ultimately it makes no difference whether you perceive of Tenement as an indie-fied punk band or a punkified indie band. Because at the end of the day, this power trio fronted by Chinese Telephones drummer Amos Pitsch hearkens back to a time when people weren’t so obsessed with labeling underground music. Great music was great music. Hell, it still is! And Tenement makes great music. The way this band combines melody, aggression, and crackling guitar noise, you’re sure to be reminded of the classic bands it emulates.  But at the same time, Tenement’s music is legitimately “now” sounding. Ultimately, it’s the distinctiveness of the band’s sound and the top-shelf quality of Pitsch’s songwriting that separate Tenement from any of a number of run-of-the-mill indie-classic revivalist type groups. If you like full-throttle rockers, songs like “Stupid Werld”, “Earwig”, and “Skyscraper” are raging, hook-laden, and immediately satisfying. But there are plenty of nice surprises as well, such as “City Bus #30”, which shifts tempos numerous times and demonstrates that finessed songwriting can still kick ass. And “Rock Eating People” sounds like what early ‘90s indie rock would have sounded like if it had actually, uh, rocked! I’ve heard more than one person say that Tenement “owns” pop-punk music these days, and I don’t doubt that for a second. But to some people, “pop-punk” still means wimpy three-chord pop and insipid lyrics about girls. Tenement is more like a band that would have fit in perfectly on your mid-’80s Descendents/Husker Du mixed tapes (yet still, improbably, sounds contemporary in 2011). Napalm Dream, delivering 13 hits and zero misses, will have fans in both “the kids” and oldsters like me. If I owned a record store, I’d file it in the “awesome” section.

Just heard the whole album. I concur with your kind words. Would pair well with the new Buffalo Tom CD.

Man, the article your going to write for record of the year is gonna be a doozy one. Bet you lay awake at night and go over the bands already...

So far, album of the year is looking like a slam dunk for Something Fierce, although there could be a strong challenge from the new BAD SPORTS album. It's been a good year for the punk rock!

Slam dunk? Really? Who are the frontrunners for band of tne year? Which could include many more bands.. What channel could I tune in to to eatch the awards show?

Maybe you could do a run down at the end of the year, like a review of the awards ceremony for F&L talking about categories, presenters, outrageousness that happened that never really happened ect.ect.

Categories of the year could be

maybe a Josh Rutledge Lifetime Achievement award or something.. go all out. This shit would be an awesome read man. The more outrageous the better!

The award could be called a "Fasty" or a "Loudy"

One tradition I'll be happy to revive is the Lord Rutledge Awards. That was always a New Year's ritual! Song of the Year is gonna be a tough call! A very tough call!

I don't give out yearly awards anymore, but the new Feelies album would win something.

I might have to nominate it for album of the year masters class along with Gang of 4, the NY Dolls, Buffalo Tom, et al.

I love Tenement so much, I must have listened to Napalm Dreams non stop for a couple of years after it was released, I only stopped because my car was stolen with the CD in it! I hope the dude that stole my car now likes Tenement as much as I do!