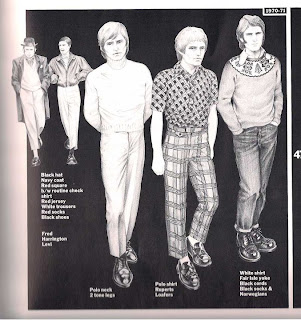 I was an Angora Debs true believer the instant I read the band bio blurb “'s answer to Pete Shelley and Dan Treacy attempting to write pop songs and smile between meltdowns”. Late of early 2000s faves the FM Knives, Zack and rone teamed up with Marie D. (The Bananas) and Thiemann (The Yahmos, Crash & Britany, the Pretty Girls) to form this notably up-and-coming punk/powerpop outfit. They don’t have that much music out there just yet, but a quick YouTube search will lead you to a dandy one-two punch of pop hits. “If I Go Back” and “Cross Your Fingers” both combine Buzzcocks style punk with high energy lo fi-ish powerpop and hints of the British Invasion. None of this is particularly surprising based on what we remember of the FM Knives. But I’m inclined at this point to say the Angora Debs might be even better than the FM Knives. I love the hooks. I love the ringing melodies. I love the contrast between the upbeat music and the emotionally distraught lyrics. “Nick Lowe on an amphetamine bender with the Buzzcocks”? Sounds good to me! Consider this group an early favorite for Band of the Year 2012!
- L.R.

I really dig the included video... This song kicks major ass. Kinda had the same bounce that reminded me of "Teenage Kicks" by The Undertones. I went to FB and liked them.

Can't get enough of these tunes!