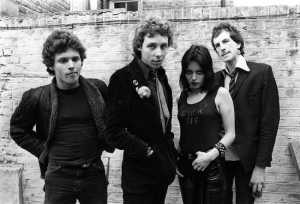 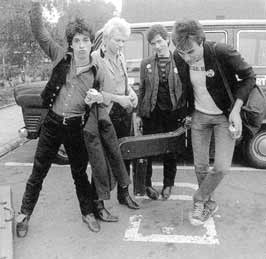 Inspired by Gunther’s declaration that Damned, Damned, Damned might be the best-ever punk album, I decided it was time to work up another one of my famous lists. It’s been a busy week with me having to empty my Netflix queue and sample the new Steakhouse Thickburger at Hardee’s. But I’ve come through. These are, in my opinion, the ten greatest punk albums ever made:
10. Eater- The Album (1977)
True: they could barely play, and every song sounded pretty much the same. But that was part of what made them great! In a first wave English punk scene dominated by older bands affecting youthfulness, Eater were bona fide teenagers who flouted base sexual urges and an adolescent level of humor (“Get Raped”). The Album is such a classic of high-speed fuck-off punk that it makes this list over landmark issues by the likes of the Buzzcocks and The Jam.
9. X-Ray Spex – Germ Free Adolescents (1978)
As I’ve mentioned previously, this is one of my favorite albums of all-time.
8. The Boys- Alternative Chartbusters (1978)
First album was great, but Alternative Chartbusters took it to another level. One of the all-time great albums to ride the fine line between powerpop and punk.
7. The Adverts- Crossing the (1978)
Hands down, the most underrated band of first wave punk. This, their first album, is a stone-cold classic.
6. Generation X (1978)
I would have ranked this higher if the issue had included “Wild Youth” and “Your Generation” (both wisely added to the American version).
5. Vibrators- Pure Mania (1977)
Maybe they did cut their hair and jump on the punk bandwagon. But you can’t deny that when it comes to the ’77 punk sound, Pure Mania is one of the all-time definitive records. From start to finish, it’s pretty much a perfect album.
4. The Damned- Damned, Damned, Damned (1977)
This is the only Damned album I ever really listen to. Gunther and I aren’t too far apart in regards to its place in history.
3. Sex Pistols- Never Mind the Bollocks (1977)
Of course!
2. The Clash (1977)
Although I kinda maybe sorta have to admit the later release was the superior product, the original issue is the “definitive” version of The Clash. Anyone who says The Clash was overrated needs to listen to this album six times in a row at max volume. “’s Burning” is the balls!
1. Cock Sparrer- Shock Troops (1983)
I’m going just a little outside the box here, but I honestly can’t think of a greater punk album than Shock Troops. Almost every song is a classic. And although it didn’t come out ‘til ’83, the sound was of a ’77 vintage. When we talk about “anthemic” punk, this is what we mean.
Yeah, I know: there’s nothing on here to represent the time period after 1983. That should hardly surprise anyone considering who I am and what I like. Was I supposed to slot the freaking Artic Monkeys ahead of X-Ray Spex? Come on! I do feel bad about excluding Wire’s Pink Flag. Ruts were on the bubble, as were The Anti-Nowhere League. I wanted to get The Rezillos in there as well (Yes, is part of the U.K…Look it up). But come on…it’s a top ten list. There are supposed to be some tough decisions! Comment away, gentlemen!
- L.R.
Posted by Lord Rutledge at 3:10 PM

I did expect a stronger showing of X-RAY SPEX... I know you really like them. REALLY like them... I thought I liked them and your writings made me think that I like them even more... but your placement of COCKSPARRER truly shows your loyalty and enthusiasm concernning music. I love yer list. They get me thinking...

And im thinking yer right about WIRE. They deserve to be in there. If i had balls enough to do my list, id like to think theyd be top 5 at least... but im not a brave man.

I don't know...I'd say #9 all-time is a pretty strong showing! That's ahead of Buzzcocks, Wire, Rezillos, The Jam, 999, Slaughter and the Dogs, Ruts, Angelic Upstarts, Sham 69, Anti-Nowhere League, Penetration, The Lurkers, Chelsea, UK Subs, and the Newtown Neurotics. It's a tough field, although MAYBE I could have bumped them ahead of The Boys. Gotta love Gunther for getting this whole topic rolling!

Great list! I have a tough time with these lists. I always wanna expand it to top 25 or more! Tough to pick just ten, but I see all classics right there. I'd go with these...

As far as a great post-1983 album, go with Leatherface's Mush. Perhaps the only disc that late in the game to rank with the classics. I'm echoing most every review written about Mush, but it's a toxic mix of Motorhead, Husker Du and Stiff Little Fingers.

999 is good...I considered each of their first three albums for this list. Ditto for the first two Adicts LPs. I'm with ya - I'd go compilation with the Business or UK Subs. And, of course, Singles Going Steady by Buzzcocks is the gold standard of singles collection.