Sex Pistols or The Damned? 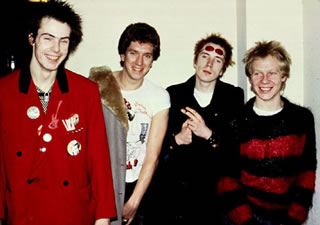 Another band battle! And it's a veritable clash of titans! I've got no idea who's gonna take this one. Both bands are among my favorite groups of all-time. Both bands were near the top of the class of my favorite era of music: '77-'79 punk rock. Do I give it to The Damned because of longevity? Do I go with the Pistols due to "historic importance"? Hmmm. I love Damned Damned Damned, but Never Mind the Bollocks could be my favorite punk LP ever. How many times, in the formative years of my punk rock education, did I play that tape?! Hundreds, probably. This one's so close that I won't even attempt to make a logical case. The logical case would be for The Damned, who continued to make good-to-great records long after the Pistols disbanded. But my gut says the Sex Pistols. The Damned were cool, but the Pistols were even cooler. I like Dave Vanian, but I love Johnny Rotten. Some may slight the Pistols by saying their fame was largely the product of marketing and controversy, but that's b.s. considering the music more than lived up to the hype. If I had to pick just one song to play for visitors from another galaxy who wanted to know what "punk rock" sounded like, I'd pick "God Save the Queen". And when you consider that certain legendary-in-their-own-right bands like the Buzzcocks and X-Ray Spex became what they did largely because they'd seen the Pistols, it kind of blows the mind.

So there's my vote. You're up next!

Damned Damned Damned might get my vote as best UK punk album. I don't play the Pistols that much these days. In fact, I'm more inclined to spin The Professionals. The band I saw the other night (So What!) did an awesome version of "1-2-3." My favorite thing about the Pistols/Professionals is Steve Jones' guitar sound.

One item in The Damned's favor - the Pistols were never in an episode of The Young Ones.

I'd have to go with The Damned, same as Gunth, I pull out The Professionals LP more now than the Sex Pistols. The love for both SP & DMND are still quite high for me...

Hmm. Im going with the Pistols on this one. I may have chosen The Dammed before, but as i now have a better understanding of THE SITUATIONIST INTERNATIONALE, i see Pistols lyrics as fucking AMAZING... "God Saved the Queen" IS awesome...

Glad you mentioned that, Shawn. The poetic aspect of the Sex Pistols is frequently overlooked. "God Save the Queen" is brilliant lyrically. And I love "Holidays in the Sun". "Bodies", aside from being offensive to all political persuasions, is surprisingly profound.

Back In The Day™ my friends and I, who sorta thought of ourselves as a gang somewhat, would use the term "BODIES!" as a saying comparable to "fuck yeah!" or as a farewell.

The Damned, I think there's something more genuine about The Damned compared to the pistols or The Clash for that matter,
I find the Pistols association with Melcome and the whole SEX shop thing to be naff and super contrived
And Never mind The Bollocks just sounds like a 70s Heavy Metal record with old man Step Toe singing over the top of it!
Damned Damned Damned is a genuine blast of Punk Rock! And the Damned didn't take themselves to seriously thank god
And I don't give a shit about Rottens lyrics cause he's turned into everything he was against